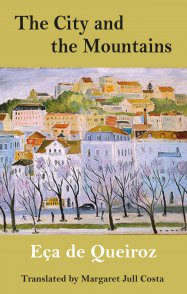 In 1880, one grey, chilly, rainy February morning, I received a letter from my good uncle, Afonso Fernandes, in which, after many complaints about his age – he was seventy - his haemorrhoids, and the heavy responsibility of managing his estate - ‘which calls for a younger man with stronger legs’ - he ordered me back to the family mansion in Guiães in the Douro valley! As I leaned against the cracked marble mantlepiece, where, the night before, my mistress Nini had left her stays wrapped up in a copy of the Journal des Débats, I severely censured my uncle for thus nipping in the bud - before it had even opened - the flower of my Juridical Knowledge. In a postscript to his letter, he added: ‘The weather here is grand, almost perfect you might say, and your dear aunt sends you her very best wishes from the kitchen, because today we are celebrating thirty-six years of marriage, and the parish priest and Quintais are coming for supper, and she wants to make her special golden soup.’
Putting a log on the fire, I thought how good Aunt Vicência’s golden soup would be. It was years since I had tasted it, or her roast suckling pig, or her rice pudding! And if the weather really was ‘grand’, the mimosa trees in our garden would be bent low beneath the weight of their yellow blooms. Into the room came a patch of blue sky, the blue of Guiães - for there is no softer, more lustrous blue – and traced green grass, brooks, daisies and clover on the threadbare melancholy of the carpet; my eyes swam with tears. From behind my wool curtains there wafted in a fine, bracing air, smelling of mountains and of pine woods.
Whistling the sweet tune of a fado, I took my old suitcase from beneath the bed and tenderly placed among my trousers and my socks a treatise on Civil Law in order that I might at last, in idle village moments spent lying beneath the beech tree, learn about the laws that govern men. Later that afternoon, I announced to Jacinto that I was leaving for Guiães. My friend drew back, uttering a soft moan of horror and pity:
‘To Guiães! Oh, Zé Fernandes, how awful!’
And all that week, he kept solicitously reminding me of various comforts that I really ought to take with me in order to preserve, in that wilderness so far from the City, at least a little of my soul in a little of my body. ‘Take an armchair! Take the General Encyclopaedia! Take a few boxes of asparagus!’
As far as Jacinto was concerned, being torn from the City made of me an uprooted tree that would never revive. He accompanied me to the train as sorrowfully as if he were attending my funeral. And when he closed the carriage door for me as gravely and finally as if he were closing the iron gate of my tomb, I almost sobbed – out of grief for myself.
I reached Guiães. There were still flowers on the mimosas in the garden; I delightedly drank Aunt Vicência’s golden soup; I put on clogs and helped bring in the crop of maize. And what with harvests and work in the fields, getting burned by the sun at threshing-time, hunting for partridge in the frozen scrub, slicing open fresh melons in the dust of village fairs, eating roast chestnuts around open fires, working by lamplight, building bonfires for St John’s night, making cribs for Christmas-time, I happily spent seven whole years there, years so busy that I didn’t have a moment to open my treatise on Civil Law, and years so uneventful that the only thing I can remember happening is that, on the eve of St Nicholas, the parish priest fell off his mare. From Jacinto I received the occasional note, written in haste amid the hurly-burly of Civilisation. Then, one very warm September, while out picking grapes, my good uncle Afonso Fernandes died as easily - and may God be praised for this grace - as a little bird falls silent at the end of a day spent in full song and full flight. I exhausted the village’s stock of mourning clothes. My god-daughter got married at the village’s annual killing and roasting of the pig. The roof on our house had to be repaired. And I returned to Paris.