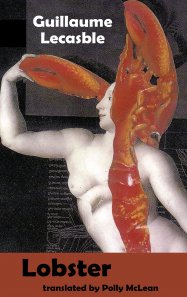 Lobster comes to his senses. He can't understand it. His shell is red, which must mean they've killed him - but he's alive. Yet the bay leaf smell coming out of him is definitely a death smell. The same smell that accompanied the death of all his kinsfolk. It's how his father smelled, and his mother, when they went by in front of him with their shells red, plopped onto their backs with their claws folded rearwards.

Images start coming back to him - the simmering stock, the way his eyes were scalded by the steam, and of course that smell of bay leaves. After that it all goes black, right until his awakening in this cold salty seawater. Alive! He's got to accept that he's alive, despite his shell having the smell and colour of death.

Right in front of him, Angelina is bent over, her hands purple from the cold, trying to break Maurice's fingers. She's not getting anywhere. Sudden death and freezing water have paralysed his sinews and fused his bones together. In one fluid movement she stands up, flicks back her tousled hair and pins it up with a brooch from her dress. Lobster recognises her, thinks ''she's the one who ate my dad''. Unknown feelings brew in him. Vengeance and desire make his flesh tingle in a way he's never felt before. He's attracted to this woman. He, a lobster, attracted to a woman. He comes closer, the better to see. The better to clarify this shocking situation. Angelina's beauty is enough to bring on fevers, and Lobster feels one mounting in him. His body heats up, but it doesn't stop his craving for vengeance. He doesn't know what to do - for the first time he is being forced to use his reason, rather than his instinct.

Angelina was so nervous, so frozen and exasperated by the stiffness of the corpse clutching at her life that she didn't notice Lobster's feelers brushing against her ankles. Although he was murmuring ''she ate my dad'', his gaze was already climbing the length of her legs, right up to the satin of her panties. The fabric was billowing around her cold-tensed buttocks. Pale downy hair stood up over goose bumps. ''She ate my dad,'' he told himself again, ''she ate my dad.''It didn't stop these shimmering hints of fabric causing his whole body to flood with desire. He was bowled over by human flesh. Lobster was experiencing lust for a woman. ''Has that scalding made me see the world from a human perspective?'' he wondered. But who cared - this lust was a fact and he was starting to enjoy it. He was feeling desire for a shell-less body. A supple, soft, silky body. A body with no hard edges. He was feeling desire for flesh, for skin. This feeling overwhelmed him, decided him: he opened his pincers and snap! cut through the wrist that had been imprisoning Angelina. Maurice's body floated away, taken by the current. Angelina thought she saw a little devil in the bloody water. She couldn't understand the hand still attached to her ankle. She crossed the dining room against the current, icy water up to her thighs, blood in her wake. She, who wanted to die. She just needed to lie down. But that hand was stopping her from escaping into death; it was pushing her towards life. She shivered. The cold had entered her body and her mind; she didn't know what to think of this severed hand. Had her will to live cut it off? Or was it a product of the madness rising in her with the cold?

She reached the staircase and climbed the first step but the cold was numbing her mind. She fainted, upright and motionless with seawater up to her belly. Lobster swam to her purple feet. Cut off the bloodless hand with his pincers, and climbed up the inside of the leg as far as the clenched knees. He was amazed at the pleasure he felt from being held in this way. His pincers slipped between the thighs, prising them gently apart. His feelers were just able to reach the satin of the panties. They fluttered, made the labia quiver. Under the shimmering material a hint of life was returning. Angelina's thighs relaxed. Lobster pulled back his feelers. Tensed and released his tail. His strokes were fast and powerful. He was making headway. He sank himself into her warming muscles; his tail did not falter. He moved forward, a centimetre at a time. Yes! Suddenly he could see the fabric clearly, glistening, pearl-like. He brought his pincers forward. Caught hold of the lace border. Pulled back the slippery satin and snipped right through it. The panties opened, the two separate pieces floating soft as seaweed in the swirl. The hair round the vulva was undulating. Lobster put his pincer in and closed it on the clitoris with the dexterity of a practised lover. What he did to Angelina next so warmed her insides that she returned to life, arching her back. Lobster was thrown into the air, stiffening his tail as he slapped back against the water in time with Angelina's rhythm. And so their wedding dance began: Angelina and Lobster at the foot of the elegant dining room staircase. Her creamy woman's body, convulsed with pleasure, trailing a bright red crustacean with one pincer secured in her hairs and the other working her clitoris, as they moved between air and water, water and air; the exuberance of these two bodies as the water spurted between her buttocks and surged around her thighs.

The bay leaf aroma embedded in Lobster's shell invigorated Angelina, returning her to consciousness. Her heat was triumphing over the cold water. Her thighs kept parting and closing. Lobster was dripping with vaginal juices. Angelina thrust more quickly, coming down rhythmically against the water. The foam around them was a glory to their union. Angelina arched her back, buttocks surging out of the water. Lobster, intimately attached to her, was shaken by staccato vibrations. Angelina reached orgasm for the first time in her life. Pleasure quivered under her nails and shook her jaw. Her toes felt connected to her throat. Unfamiliar sap was running right through her. Gently, her body relaxed and re-entered the water now warm from the fever of their union; Lobster floated motionless on his back with his pincers splayed.

Happily afloat on the swirl of the sinking ship, Angelina slipped a hand between her legs, picked up Lobster and put his head inside her mouth. She rolled her tongue around his eyes and mandibles. As Lobster was rinsed in saliva he dreamt of his new life - a pleasure to be re-lived again and again.

The sirens that had been wailing for an hour brought Angelina back to the reality of the shipwreck. She slipped Lobster between her breasts.