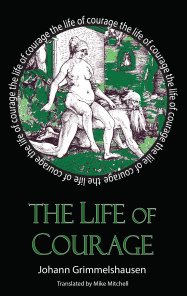 Courage proceeds to marry for the third time, exchanging the status of a
captain's wife with that of a lieutenant's. However things don't turn out so
well this time and she and her lieutenant fight with cudgels about who is to
wear the trousers. She wins, thanks to her determination and courage, and
her husband walks out on her and disappears.

My husband's body was scarcely cold in its grave when once more I had a
whole dozen suitors to choose from, for I was not only young and beautiful,
I had fine horses and a fair sum of money. Even though I let it be known
that I intended to go into mourning for my captain for six months, I could
not keep off the importunates who came swarming round me like bumblebees
round an open honeypot. The colonel promised me board and lodging with the
regiment until I had sorted my affairs out. I for my part got two of my
servants to perform the services their late master could no longer provide,
and whenever I thought there was an opportunity of grabbing something from
the enemy I was as ready to risk my neck as any soldier. In that pleasant,
not to say lively encounter at Wimpfen I captured a lieutenant and, not far
from Heilbronn during the following pursuit, a cornet with his standard. My
two servants made a good haul of money from the plundering of the baggage
train which, according to our agreement, they had to share with me.

After that battle I had even more admirers than before, and seeing that with
my previous husband I had had more good days than good nights, also taking
into account the fact that since his death I had been on short commons, I
decided to choose a man who would make up for everything I had been missing,
a man who, to my eyes, outshone all his rivals in looks, youth, intelligence
and bravery. He was Italian by birth, had black hair and white skin, and I
thought him more handsome than any artist could paint. He behaved towards me
with all the fawning humility of a spaniel, and when I agreed to marry him
he went into raptures, as if God had reserved the delights of heavenly bliss
for him alone. The wedding took place in the Imperial Palace at Wimpfen and
we were honoured with the presence of the colonel himself and most of the
senior officers, all of whom wished us - though in vain - a long and happy
marriage.

As the sun was rising after our first night together we lay in bed chatting
and whispering endearments. I was about to get up when my lieutenant called
his boy into the bedroom and ordered him to bring two stout cudgels.
Assuming the poor lad was the one they would be tried out on, I pleaded for
him until he returned with the cudgels and put them, as ordered, on the
table where our clothes were. After he had left, my husband of one night
said to me, 'Now my love, you know that everyone believed you wore the
trousers when your former husband was alive, and decent people spoke
scornfully of him because of it. I have good reason to believe you intend to
continue this habit, and I could not abide it, or at least would find it
difficult to endure. As you can see, the trousers are there on the table,
together with those two cudgels, and if you want to keep on wearing them,
then I'm afraid we will have to come to blows to decide who gets them. I
think even you would agree, my darling, that it is better one or other of us
gets them right from the start, instead of having to fight over them every
day of our marriage.'

'Dearest,' I replied, giving him a smacking kiss, 'I would have thought the
cut-and-thrust between us had already taken place. It never occurred to me
to try and wear the trousers in our marriage. I know that woman was taken
from man's side, not from his head, and I did hope my beloved would bear
that fact in mind and treat me as his spouse, not as his doormat, as if
woman had been taken from the soles of man's feet. As you can see, I don't
sit on your head, but take my proper place at your side, and I humbly beg
you to give up the notion of this ridiculous duel.'

'Ha!' he said, 'that's a typical woman's ploy for taking command before a
man realises what's happening. We have to fight first so that I shall know
which of us owes obedience to the other in future.'

With that he wrenched himself from my embrace as if he had been struck with
madness. I, however, jumped out of bed, slipped into my shift and drawers,
grabbed the shorter but stouter of the two cudgels and said, 'Since you
order me to fight and insist the winner will have authority over the other
(something I never desired to claim), I would be a fool to let slip the
opportunity of getting something I wouldn't otherwise have thought of
aspiring to.'

He wasted no time either. Seeing me ready to meet him, he pulled his
trousers on, took up the other cudgel and tried to grasp me by the head in
order to hold me while he gave my back a good thrashing. But I was much to
quick for him. Before he knew what was happening he had a whack on the head
which sent him tumbling to the ground like a felled ox. I gathered up the
two cudgels, intending to throw them away, but when I opened the door I
found several officers outside who had heard our altercation, some even
having peeped through a gap. I left them to their laughter, slammed the door
in their faces, threw on my dress and revived my numskull of a husband by
pouring the contents of the washbasin over his face. Once I had him sitting
at the table and had made myself decent I let in the officers who were
waiting outside.

You can imagine the looks we gave each other. I realised that my dear
husband had arranged for the officers to meet outside our room at this time
to act as witnesses to his stupid scheme. When, before the marriage, they
had teased the dimwitted stud that I would soon be wearing the trousers, he
had replied that he had a cunning plan he was going to put into effect the
morning after our wedding. This would make me so biddable, he claimed, he
would only have to look at me to have me trembling in my shoes. But the poor
fellow picked on the wrong woman in Courage. All he achieved was to make
himself the laughing stock of the whole regiment and I would not have gone
on living with him if it hadn't been ordained by the holy sacrament of
marriage. You can well imagine the cat-and-dog life we led together. When he
found it impossible to get his own back on me and the general mockery became
unbearable, he pocketed all my ready cash and went over to the enemy with my
three best horses and one of the servants.