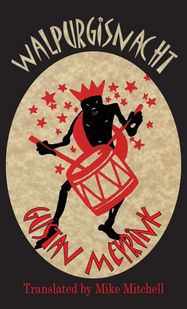 The marriage ceremony was over. Jubilation echoed round the cathedral, drowning a faint whimpering. Polyxena did not dare turn round to see; she knew what was happening.
“The crown!” The voice rang out again.
“The crown! The crown!” the cry was taken up from pew to pew.
“It’s hidden at Countess Zahradka’s,” someone shouted. They all thronged to the door, a wild surge.
“To Countess Zahradka’s! Countess Zahradka’s! The crown! Fetch the royal crown!”
“It’s made of gold, with a ruby at the front!” came a screech from the gallery: Božena, who always knew everything.
“Ruby at the front,” ran the description from mouth to mouth, and they were all as certain as if they had seen the crown with their own eyes.
A man climbed onto a plinth. Polyxena recognised the lackey with the vacant stare. He threw his arms about and screamed in such a rapacious frenzy that his voice cracked, “The crown is in Wallenstein Palace!”
No one was in doubt any more. “The crown is in Wallenstein Palace!”

Behind the howling mob marched the grim, silent figures of the ‘Brothers of Mount Horeb’, with Polyxena and Ottokar on their shoulders again, as on the way to the Cathedral. Ottokar was wearing the purple robe of Duke Bo&#345;ivoj and carrying his ivory sceptre.
The drum was silent.
Polyxena’s gorge rose in a surge of hatred for this screaming rabble that could be roused to a frenzy of rape and plunder in a few seconds. ‘Lower than wild beasts they are, and more cowardly than the worst cringing cur;’ and with a deeply cruel sense of satisfaction, she imagined the end of it all, the inevitable end: the rattle of machine-gun fire and the mountain of corpses.
She glanced at Ottokar and gave a sigh of relief. ‘He sees and hears nothing. It is like a dream to him. God grant him a quick death, before he wakes.’
She was completely indifferent to her own fate.

The gate of the Wallenstein Palace was firmly blockaded. The mob attempted to climb the walls, and fell back down with bloody hands: the top was all covered with broken glass and iron spikes.
One of the men brought a huge beam.
Hands grasped it.
Back and forward. Back and forward: the monster charged the obstacle again and again, splintering the oak doors with a dull thud until they were wrenched from the iron hinges and disintegrated.
In the middle of the garden was a horse with a red bridle, glassy eyes, a scarlet blanket on its back and its hooves nailed to a board on wheels.
It was waiting for its master.

Polyxena saw Ottokar bend forward, staring at it, and put his hand to his forehead, as if he were suddenly coming to. One of the Brothers of Mount Horeb went up to the stuffed horse, took the bridle and rolled it out into the street. They lifted Ottokar up onto it, whilst the rest of the horde stormed into the house with blazing torches.
Windows crashed to the pavement, the glass shattering into a thousand fragments; silverware, gilded armour, swords encrusted with precious stones, bronze grandfather clocks were all thrown out and clattered onto the cobbles, piling up into mounds. Not one of the Taborites even looked at them. From inside could be heard a loud tearing noise as they set about the tapestries on the walls with their knives.
“Where is the crown?” Havlik shouted to those in the palace.
“Not here” -- roars of laughter -- “Countess Zahradka will have it,” came the reply amid all the bellowing and braying.
The men lifted the board with the horse onto their shoulders, broke into one of their wild Hussite songs, and set off at a march towards Thungasse, preceded by the bark of the drum.
High above them, his purple robe fluttering in the breeze, sat Ottokar on Wallenstein’s charger, as if he were riding over them.

The entrance to Thungasse was blocked by a barricade. A band of ancient servants, led by Molla Osman, welcomed them with a hail of bullets and stones. Polyxena recognised the Tartar’s red fez.
To ward away any danger from Ottokar, she involuntarily directed a current of will-power at the defenders; she could feel the aweysha strike among them like a lightning bolt, so that they were seized with panic and fled.
Only Molla Osman was unaffected. He calmly stood his ground, raised his arm, aimed and fired. Struck in the heart, the tanner threw his arms in the air and collapsed.
The yapping of the drum was suddenly silenced.
But immediately — Polyxena’s blood froze in her veins — it started up again, more muffled than before, but more bloodcurdling, more inflaming; in the air, echoing back from the walls, rising from the ground, it was all around. ‘It can’t be. It’s just the echo. My ears must be playing tricks on me,’ she told herself and looked for it. The tanner was on his face, his fingers clutching the barricade; the drum had disappeared, but the drum-roll, suddenly turning high and shrill, flew on the wind.

The Taborites swiftly removed the stones and cleared the way. The Tartar kept on shooting, then he threw his revolver away and ran back up the alley into the house of Polyxena’s aunt, Countess Zahradka, where all the windows were brightly lit.
With the terrible drum constantly sounding in her ears, Polyxena found herself carried triumphantly forward beside the towering, swaying, dead horse that gave off an overpowering smell of camphor.
High above her sat Ottokar.
In the bewildering glare of the criss-crossing lamps and torches Polyxena was sure she caught sight of a shadowy figure flitting through the crowd, now appearing, now disappearing, now here, now there. It seemed to be naked and wearing a mitre on its head, but she could not make it out clearly. Its arms were moving up and down in front of its chest, as if it were beating an invisible drum. When the procession stopped outside the house, it suddenly appeared at the top end of the street, a shadowy drummer formed from the smoke, and the rattle of the drum seemed to come from a great distance.
‘He is naked; his skin has been stretched over the drum. He is the snake that lives within men and sloughs its skin when they die. I ...’ Her thoughts were becoming confused. Then she saw the white face of her Aunt Zahradka, distorted with hate, appear over the iron bars of the first-floor balcony, heard her shrill, mocking laugh and her howl of fury, “Off you go, you dogs, off you go!”
The bawling crowd, forcing its way along the street behind them, came nearer and nearer. “The crown! You must give him the crown! You must give your son the crown!” screamed the bedlam of furious voices.
“Her son?!” Polyxena exulted, and she was almost torn apart by a wild, unbridled joy. “Ottokar is of the same blood as I!”
“What? What do they want?” asked the Countess, turning to those behind her in the room. From below Polyxena could see the head of the Tartar, as he nodded and gave some answer, and heard the biting scorn in the old woman’s voice, “To be crowned, that’s what he wants, is it? Ottokar Vondrejc wants to be crowned? I’ll put the crown on his head myself, I will!”
The old woman disappeared into the room. Her shadow appeared on the curtains, bending, as if she were picking something up, and then straightening up again.
Angry hands were hammering on the door below. “Open up! — Fetch that iron bar! — The crown!”
Then Countess Zahradka reappeared on the balcony, her hands behind her back. Ottokar, in the saddle of the stuffed horse carried on the men’s shoulders, was almost on the same level as she was, his face only a short distance away from hers.
“Mother! Mother!” Polyxena heard him cry. Then a stream of fire blazed out of the old woman’s hand.
“There you have your crown, bastard!”
Shot through the forehead, Ottokar tumbled from the horse.