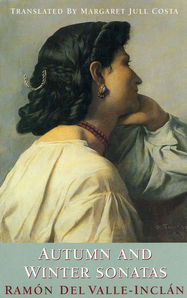 María Isabel and María Fernanda announced themselves first by beating on the door with their childish hands. Then they shouted out in cool, crystalline voices that had the charm of fountains speaking to the grasses and the birds.
'Can we come in, Xavier?'
'Come in, my dears.'
It was already late morning and they had come at Isabel's behest to ask if I had had a good night, a sweet question that stirred feelings of remorse in my heart. The little girls stood next to me at the balcony window looking out onto the garden. The wild, green branches of a fir tree scraped against the sad, mournful panes. The fir tree shivered in the mountain wind and its branches scratched at the window as if the old, shady garden were sighing with longing for the children's games to commence. A flock of pigeons was fluttering about near the maze; then out of the cold, blue sky came a hawk with broad, dark wings.
'Kill it, Xavier! Kill it!'
I fetched my gun which was lying gathering dust in a corner and hurried back to the window. The little girls were clapping and shouting:
'Kill it! Kill it!'
At that moment, the hawk dropped down on the flock of pigeons which flew off, startled. I put my rifle to my eye and when the way was clear, I fired. A few dogs in nearby farms barked a response. The hawk plummeted to earth and the little girls ran out and brought it back, carrying it by the wings. Blood was staining its breast feathers. They bore off the hawk in triumph. I called to them, suddenly filled by a new anxiety.
'Where are you going?'
They turned at the door, smiling and happy:
'Mama will get such a fright when she wakes up!'
'No, don't!'
'It'll be such a lark!'
I did not dare to stop them and I remained alone, my soul plunged in sadness. Such a bitter wait, such a timeless moment on that joyful morning all clothed in light, until, from the depths of the palace, came innocent moans, heartrending cries and terrible sobs! Faced with the cold ghost of death scything through all the dreams in my soul's garden, I felt a dumb, desperate anguish. Ah, the lovely dreams that are love's enchantment! It was a strange sadness as if evening had fallen over my life which, like a sad winter's day, had ended only to begin once again with a sunless dawn. Poor Concha was dead. That dream-flower to whom my every word had seemed beautiful was dead, that flower to whom my every gesture seemed sovereign. Would I ever find such another pale princess with sad, spellbound eyes, someone who would always think me magnificent? The thought that I might not made me weep and I wept like an ancient god at the death of the cult that once worshipped him.