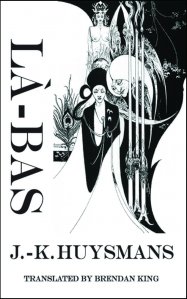 The revelation of this form of Naturalism had come to Durtal the year before, when he was less worn out than he was now by the ignominious spectacle of the coming fin de siècle. It was in Germany, standing before a crucifixion by Matthias Grünewald.

Durtal shivered on his sofa and half closed his eyes in pain. Now that he had evoked it, he could see the painting there before him with an extraordinary lucidity, and the cry of admiration that had escaped him on entering the small room in the Cassel museum echoed again in his mind as, in his study, this formidable Christ rose up on his cross, the upright of which was traversed by way of a brace with the branch of a tree, its bark half peeled off, and sagging like an archer's bow under the weight of the body. The branch seemed on the point of springing back, as if to hurl, from very pity, far from this scene of insults and abuse, this emaciated body which was being held down nearly to the ground by enormous nails that pinioned the feet.

Dislocated, almost ripped off at the shoulders, the arms of Christ seemed to be bound along their whole length by twisted sinews of muscle. His left armpit was broken, snapped; his hands were wide open, brandishing haggard fingers, which, even so, were offering their blessing in a gesture that combined entreaty and reproach in equal measure; his chest was trembling, greasy with sweat; his torso was striped by circular bands where the bones of the rib-cage showed through; his flesh was swollen, rotten and discoloured, streaked with flea bites and flecked, as with pin-pricks, by the scourging rods whose tips had broken off under the skin, piercing him again here and there like thorns.

The sanies stage had begun; the suppurating wound on his side was flowing thickly, covering his hip in blood like dark blackberry juice; pinkish serum, whey-coloured lymph and fluid like grey Moselle wine were oozing from his chest, soaking his stomach, underneath which was tied a tattered loin-cloth; further down, the knees were drawn together by force, knocking the knee-caps against each other, and the contorted legs arched down to the feet, which, twisted one onto the other, were stretching and writhing in an advanced state of putrefaction, turning green underneath streams of blood. These feet, sponge-like and congealing, were appalling, their flesh was bursting, rising above the head of the nail, and their contorted toes contradicted the imploring gesture of the hands, cursing, almost scratching with the bruised crescent of their nails, the ochreous, iron-rich soil, red like the earth of Thüringen.

Above this putrefying body, the head appeared savage and immense; encircled by a ragged crown of thorns, it hung, exhausted, a haggard eye, half-opened in pain, still quivered with a look of sadness and fear; the face was rugged, the forehead drawn, the cheeks parched: its ruined features were bleeding, while the mouth, hanging open, grinned, the jaw contorted by excruciating, tetanic spasms.

The suffering had been dreadful and his death agonies had frightened his cheerful persecutors away.

Now, under the night-blue sky, the cross appeared to be sinking even lower, almost level with the earth, watched by two figures standing either side of Christ: one, the Virgin, wearing a hood the colour of blood serum falling in tight folds over a loose, full-length azure robe, the Virgin austere and pale, face swollen with tears, eyes staring, sobbing, burying her nails into the fingers of her hands; the other, Saint John, a kind of vagrant with the swarthy complexion of a Swabian rustic, tall, with a wispy, curly beard, clothed in long strips of material that look as if they were cut from the bark of a tree, a scarlet robe and a yellow chamois cloak, the lining of which, where it was turned back at the sleeves, was a feverish green the colour of unripe lemons. Although stronger than Mary, he is bent and cast down, exhausted by weeping, though he still remains standing; his hands are joined together in a transport of grief as he strains towards the corpse, which he gazes at with his red, filmy eyes, and he chokes back a cry, silently, in his mute, quivering throat.

Standing before this Calvary, stained with blood and blurred by tears, one is far from those meek Golgothas which, since the Renaissance, have been adopted by the Church. This tetanic Christ was not the Christ of the Rich, the Adonis of Galilee, the well-fed dandy, the beautiful young man with ruddy locks, forked beard and pale cavalier-like features, who for four hundred years has been adored by the faithful. This was the Christ of Saint Justin, Saint Basil, Saint Cyril, and Tertullian, the Christ of the early years of the Church, a common Christ, ugly, because he took on himself the sum of all the world's sins and assumed, in his humility, the most abject of appearances.

This was the Christ of the Poor, a man who compared himself to the most wretched of those he had come to redeem, to outcasts and to beggars, and to all those whose deformity or poverty makes them a target for the baseness of man; and he was also the most human of Christs, a Christ of the flesh, poor and weak, abandoned by a father who intervened only when no further torment was possible, a Christ attended solely by his mother, whom he had been obliged to call on, as do all those in torment, with an infant's cry, a mother who was powerless now to be of any help.

By a supreme act of undoubted humility, he had embraced the fact that the Passion would take him to the limit of human endurance, and, in obedience to incomprehensible laws, he had accepted that his divinity should, in effect, be suspended during the beatings and the scourgings, the insults and the spitting, during all the outrages of his tormentors, even during the fearful torture of an interminable death struggle. He had thus to suffer all the more, to whimper, to die like a common thief, like a dog, cruelly, basely, enduring this downfall to the end, even to the ignominy of his own putrefaction, to the final insult of purulence.
Certainly, Naturalism had never ventured into such subjects before. Never had a painter dabbled with the charnel-house of the divine in this manner and so brutally dipped his brush in the glaze of his bodily secretions or in the bloody palette of his wounds. It was extreme and it was horrifying. Grünewald was the most fanatical of realists, but as one looked at this Redeemer of whores, this God of the morgue, everything changed. >From that ulcerated head emanated glimmers of light; a superhuman expression illuminated the gangrened flesh, the eclampsia of his features. This carcass spread out before one was that of a God, and, without aureole, without nimbus, his only adornment a rough crown of thorns, speckled with red points by drops of blood, Jesus appeared in his celestial supraessence between the Virgin, grief-stricken and blinded by tears, and Saint John whose burnt-out eyes could find no more tears to shed.

Those faces, at first glance so commonplace, were now resplendent, transfigured by the unprecedented suffering of their souls. This was no longer a common criminal, a beggar-woman and a simple rustic, but superterrestrial beings in the presence of a God.
Grünewald was the most fanatical of idealists. Never had a painter so magnificently glorified the highest, or so fearlessly leapt from the very summit of the soul to the distracted sphere of heaven. He had gone to opposing extremes, and had, from the triumph of filth, extracted the purest cordial of love, the bitterest essence of tears. In this picture was revealed the masterpiece of an art pushed to its limit, one summoned up to express both the invisible and the tangible, to make manifest the lamentable impurity of the body and to refine the infinite distress of the soul.

No, this had no equivalent in any language. In literature, certain pages of Anne Emmerich on the Passion approached, though weakly, this ideal of a supernatural realism, of a life both truthful and exsurgent. Perhaps, too, some of Ruysbroeck's mystical utterances, leaping off the page like twin jets of white and black flame, recalled at certain points Grünewald's divine abasement, but again, no, the painter's work remained unique, for it was at one and the same time out of reach and on a level with the earth.