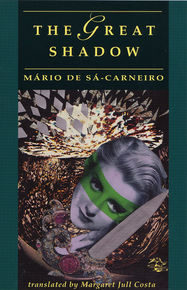 12th October, Lisbon 1907
I am a golden dagger whose blade has grown dull.
My soul fits me tightly, it vibrates with the desire to burst forth. Only my body is heavy. My soul is imprisoned in a narrow hallway.
I am not a coward when it comes to fear. I am only a coward about myself. Ah, if only I were handsome...
I feel ashamed at my own feelings of greatness.
I am so great that I can only tell my secrets to myself.
I never had any doubts. I have always felt cold.

13th November
It's terrible the way I spend all my time wandering. In myself and amongst others.
I always stayed on, I never moved, even when I lost myself.
Sometimes, even now, I decide that I will leave. And I do. But I never manage to go through with it. If it is not my fault, then it is the fault of the others who beckoned me on.
If they did beckon to me, it was because they assumed that I would never follow them; they did so because they wanted to suffer. And since I did eventually respond to their gestures, they became disenchanted with me and they fled, mocking me. I detached myself from them.
I am only allowed to be happy on condition that I am not.

2nd December
It's unbelievable!
Almost everyone is quite contented with themselves; they are fulfilled. They live and they progress. They start families. People kiss them.
How disgusting! Not even to have enough genius to want to be a genius!
Poor wretches!

30th December
... And the open windows are still...still closed...
I have run aground inside myself.
I can no longer imagine myself.

12th October, Paris 1908
The grey ruins of golden statues; blind, purple sphinxes; thrones without steps and the great marble staircase carpeted in sackcloth!...
But why do I look at myself like that, why?... It is this longing to go deep into myself that causes evening to fall inside me. And yet I feel so proud to have made that crossing...
Ah, if only I were who I am... What a triumph that would be!...

13th October
What it comes down to in the end is this: I am too much for myself.

15th November
Perhaps I am a whole nation... Can I have become a country?...
Possibly.
One thing is certain, I feel that inside me there are city squares.

16th November
That's it, that's it!
I have become a nation...
...Vast deserted roads...trees...rivers...bridges...
a lot of bridges...
I cannot fill myself. I am too much for myself. I rattle about inside.

14th December
My spirit slipped and fell.
I overstepped the mark.
I stand coldly face to face with myself and I am almost happy.

5th January, Paris 1909
Today I met him for the first time.
It was in the café. I suddenly saw him sitting opposite me... The café was full. That's why he came and sat down at my table.
But I didn't see him sit down. When I noticed him, he was already sitting opposite me. No one had introduced us and yet we were already chatting to each other...
He's so handsome!
And what about the triumphal look that lights up his lean, gaunt face? His long hair falls in ringlets. His hair is reddish blond. I felt like kissing him hard on the mouth...
Yes, he would know how to be me.

10th January
We meet every night now. We spend long hours together.
I don't know who he is nor where he came from.
We constantly misunderstand each other. We never agree. Again and again he humiliates me, shakes me. In short, he puts me in my place.
He doesn't see anything the way I see it.
He is a different colour entirely.
His company is a torment to me. Yet I seek him out everywhere. When he fails to appear at the meetings we arrange - which happens often - an infinite sadness fills me.
The odd thing is I have never seen him arrive. By the time I realise he is there, he is already sitting opposite me.
Sometimes he arrives very late. When he does finally turn up, I feel terribly tired, exhausted, as if I had just made a huge physical effort.
I have never heard his footsteps.
He told me that he is Russian, but I don't believe him.

18th January
Our conversations cover all kinds of topics, but we spend most of the time talking about our souls. I reveal mine to him entirely. And he seems to believe me.
He has such long, long fingers...

12th March
My friend is becoming truly unbearable. He makes me his plaything. He takes every opportunity to show how he despises me.
Every day his opinions are more repellent and more beautiful.

28th March
Today someone told me terrible things about my friend.

3rd April
Yet how powerful he is!
He may be perverse, but he is worth more than all the others put together.
He is all intensity, all fire.
When I am with him, I see what I would like to be, what I also, coincidentally, am.
If I were him, I would not be too much for myself.
Basically, his opinions are mine.
It's simply that I do not wish to believe what I think. I have my pride. That is perhaps what he lacks.
I am greater than he is. But he is beautiful.
He is as beautiful as gold and as vast as the shadows.
The open windows only opened up for me within him.

15th April
Should I kill him?

30th April
I should do something. I feel I am losing my personality.
Little by little my soul is shaping itself to his.
I have genius enough to admire him. This may be my perdition.
Let us at least be ourselves.
Let us suffer, but let us be ourselves.
I no longer believe in my sufferings...

5th May
He talks a lot to me about his lovers, but I have never seen his lovers.
I don't know where he lives.

18th May
I can never forget him. His words always come back to me.
What I can never remember is the sound of his voice.
As for his footsteps, I have yet to hear them.

12th June
I am definitely going to run away from him. Enough is enough.

19th June
At last! The spell is broken... I am leaving this morning.

22nd June
My friends say that I have changed a lot. They say my voice is different, my attitudes, my physical appearance.
I return home filled with fear.
I look at myself in the mirror...
And to my horror I discover on my face, as if in a caricature, the rictus of disdain on his face.
I say something out loud...
And for the first time I remember the sound of his voice...
I stride around the room...
I'm trembling all over!
For the first time I hear his footsteps...

30th June
I must rid myself of this obsession.

1st July
My God, my God, I no longer have the same gestures, the same thoughts as I used to have! Everything about me has changed. Everything about me rings false.
And everyone looks at me oddly...they all flee from me...
All of them... I hate them... I find them utterly inferior...
But he, yes, he is great! He, undoubtedly, is great.

20th July
This hallucination of mine is such torment.
I no longer know how to defend myself against it.
I speak. And suddenly my words diverge from my thoughts.
When I speak, it is he who is doing the thinking...

25th July
I sit down at my work table.
I am going to begin writing something I have pondered for a long time.
I write the first lines.
Disillusioned, I get up.
I cannot accept my ideas.
They seem commonplace to me.
I don't believe in what I write.

I doubt if I am, in fact, an artist.
The other is right.
If I were an artist, I would be beautiful.
And I would have long fingers.
And I would be pale.
And I would never know what time it is.
I tear up everything I wrote.
I feel sickened by myself.

26th July
Before, I used to kiss myself in mirrors.

6th August
He used to wear a strange gold ring on his left hand.
One day he told me that he had found it in the sea, when he was a child.
And that he was kidnapped by sailors on a schooner.

20th August
I am surrounded by the ruins of myself.
Golden threads draw me towards the abyss.

2nd September
The truth, the terrible truth is this: hour by hour I am slipping away from myself. I overflow my borders.
I suffer so much.
8th September
A mystery!
I did not give him my address; I did not tell him where I was going and today - yes, today in my house - I received a telegram from him. He arrives tomorrow.
Damn him!
9th September
This is what happened:
I decided to shut myself up in the house, giving orders to the servants not to open the door to anyone.
But a terrible fear gripped me.
I went out...
And suddenly he was walking by my side!...

15th September
He never leaves me...

18th September
My senses are beginning to change. Sounds have different smells now. I feel colours in quite different ways. The light pierces me.

26th September
How I have struggled!

28th September
The end!
I no longer exist. I have hurled myself into him.
I have lost myself.
We have ceased being us. We are one now.
I knew this would happen; it was fated...
Ah, how I hate him!
He sucked me in little by little.
His body was porous. He absorbed me.
I no longer exist.
I have disappeared from life.
I have formed a cyst inside him.
Ruins!

2nd October
The most painful thing is that he does not even know that he has absorbed me because he has no respect for me.
If he had, I would have been the one to absorb him.

8th October
Where he goes, I go, but I never know where he is going...
His ecstasies are my ecstasies, but he alone does the possessing.
His ideals are my ideals, but he alone realises them.
How can I free myself?