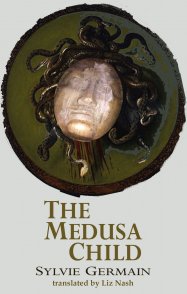 Her name is Lucie Daubigne. Unlike Lou-Fe she is not in any sense a child prodigy, and has no odd characteristics. She is a little girl about eight, who is always cheerful. If there is anything remarkable about her, it is her huge black eyes. Their gaze is very direct, and they sparkle with merriment. She has long black hair which she wears in plaits. She is interested in her appearance; she adores coloured hair-slides and painted wood or glass necklaces, and loves to wear pretty dresses and embroidered socks. ‘My daughter has already has a passion for trashy clothes and baubles,’ her mother often declares, ‘you can see that she’s going to be a woman of fashion!’ But the crimson woollen scarf that she wears around her neck on this cold February day has nothing to do with a desire to be fashionable; it is an oriflamme, a rallying banner. A manifest sign of her fondness for the boy she nicknames Lou-Fe.
It was she who had the idea that each of them should wear an identical scarf. And it was she who chose the colour.
When her mother asked her before Christmas what she would like to have as a present, she declared: ‘A scarf, in fact two scarves! Both the same, and red! The most beautiful red possible!’
Her mother said mockingly,’ Oh I see, the other one’s for your boyfriend, isn’t it?’
But Lucie hates that word; its fine for grown-ups and idiots, but not for her and Lou-Fe. He means a great deal more to her than that; he is her twin. One day in the street she walked past a woman holding two children by the hand who were so alike that they appeared to be the same person twice over. This struck her imagination so forcibly, and seemed to her such an admirable phenomenon, that she declared twinhood to be a superior condition. A great deal superior to the banal condition of being in love. And so she sealed her friendship with that beautiful word which in her opinion sums and expresses to perfection the absolute of affection. What does it matter if her supposed twin I older than she, if his hair is red and hers dark, if he has light eyes and hers are very black. After all, her own brother Ferdinand, her mother’s son by her first marriage, is seventeen years older than she, and has golden-blond hair and blue eyes. That shows that all these physical details are of little importance. What is more, she is a Gemini: that must mean something, surely. And then there is the fact that they are sporting these beautiful red scarves in honour of their friendship. For Lucie that is proof enough.
Their friendship came into being more than two years a go now, when Lucie left the little school to go to the middle school which Lou-Fe attended. As they were neighbours, they took to walking to school together. She lives in Weeping Barn Street which runs perpendicular to Birdcatcher Street. Weeping Barn Street is on the way out of the little town, leading down towards the marshes in a wide, gentle bed. Just on the curve stands the Daubigne family’s home. It is a beautiful house, sheltered from view behind leaf-green painted gates, clipped boxwood hedges, dog-rose bushes, small shrubs and slender little columns of hollyhocks and lupins.