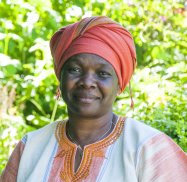 Adrienne Yabouza was born in Central African Republic in 1965. After fleeing the civil war with her five children in 2013, she gained political asylum in France. She is self-educated, and did a variety of jobs before working as a hairdresser for many years. She now dedicates herself to writing fiction for adults and children, in Sango, Yakoma, Lingala and French. Co-épouses, co-veuves was published in Mali in 2016 and is her second novel for adults to be published in French.