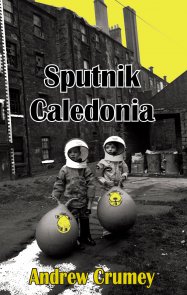 'This is a surprisingly moving novel about the impersonal forces - be they political, quantum, temporal or otherwise - that can threaten or shatter the bonds of love, and of family life. Never has astrophysics seemed so touching and funny.'

Sinclair McKay in The Daily Telegraph

Jonathan Gibbs in The Independent

' You are invited to use your own brain to grasp the links between Goethe and science, the circular thinking of Kant and the inward gravity of black holes, come out with your own answers, your own universe. There are echoes, here, of Alasdair Gray's Lanark: echoes, oddly enough, of Jonathan Coe's What a Carve Up! In a way, none of it should work but it does, gloriously. There is some beautiful writing, and quiet fun. Along the way one gets to learn a surprising amount about the historical, near-poetic links between hard science and philosophy. At the end, however, two aspects linger; the deftly drawn parallel world, a real haunting triumph, and the very real, very human, quietly tragic tale, only properly there at the very end, of a good if misguided man, father Joe, given up on competing global philosophies but struggling with something far harder, harder than Einstein or Goethe: to cope, simply, with the loss of his wee boy.'

Euan Ferguson in The Observer

'An ingenious blend of philosophy, physics and fantasy...immensely stimulating and entertaining. '

Steve Poole in The Guardian

' The chirpily surreal title of this novel sums up Andrew Crumey's work, which sites itself at a risky double intersection between physics and comedy, sci-fi and serious contemporary fiction.'

'... the sweep and scope of Sputnik Caledonia should leave you breathless with admiration: not only do we learn, as we often have from Crumey's novels before, but we also laugh, a lot. The final revelation on which the novel ends is both emotionally powerful and intensely satisfying. Sputnik Caledonia is a quantum leap forward for the Scottish novel..'

David Stenhouse in Scotland on Sunday

'The nature both of writing and reading fiction is that we explore other ways of being ourselves - in this, fiction is like dreaming, or like inhabiting the many alternate worlds of sf and quantum physics. Andrew Crumey's novels have always been as much about the possibilities of metafiction as about the three-dimensional characters he creates; Sputnik Caledonia is at once sensitive about loss and hard-earned maturity, and intelligent about fools' paradises and the people who fabulate and live in them.'

Roz Kaveney in Time Out's Book of the Week

'Crumey writes brilliantly about being a boy... A brio of a book.' Di

Diana Hendry in The Spectator

'Sputnik Caledonia is a wildly imaginative novel, but it’s engaging too, the early chapters of Robbie in a recognisable early-1970s Scotland sustaining our interest through all the twists it takes later on. And although Crumey doesn’t tie up all his loose ends in a conventional manner, within the bounds of the book’s own internal logic, all its pieces fit neatly together. It’s an exciting novel, experimenting with quantum realities without sacrificing the essential emotional core of a work of fiction.'

'A re-release of Andrew Crumey’s highly acclaimed novel, this book, split into three parts, begins with protagonist Robbie’s upbringing in Scotland, with his staunch socialist father, dreaming of becoming a cosmonaut. Then after being immersed in a parallel, communist universe, the third part of the novel sees his return to the real world as a middle-aged man, or perhaps a ghost. This is a highly original and ambitious piece of work, written in an engaging style.'

Amy Forde in Big Issue in the North

It is a novel which is ambitious as the young Robbie Coyle himself, and similarly threatens to fail at times, but when you reach the unexpectedly emotional finale you are in awe that Crumey has once again pulled it off. When taken with his other novels Pfitz and The Secret Knowledge, it could be argued that Andrew Crumey is not only one of the most interesting and challenging novelists around, but one of the very best.He may be your new favourite writer:you just don't know it yet. Universally approved