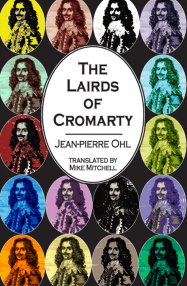 Some books are real surprise and this is one of them. What is at heart a detective story becomes in turn a love story, a tribute to friendship and courage, an ode to books and booksellers and to nineteenth-century literature. Perhaps strangest of all, Ohl clearly has an intimate knowledge of Islay and Jura, including the whirlpool of Corryvreckan, as well as of Edinburgh. The story is mainly set in the 1950s when Mary Guthrie, a brilliant English postgraduate from Islay, decides to write a doctoral thesis on Sir Thomas Urquhart, the Scottish author, mathematician and translator of Rabelais, who supported the Royalist cause in Scotland and then died in exile in 1660. The Urquharts – both present and past – play a leading role in the story, as does a renegade catholic priest, Ebenezer Krook, with whom Mary, rather improbably, has an affair. But against Krook’s unfolding family story, the most improbable events start to feel quite normal – even down to Eric Blair, aka George Orwell, who visited Jura regularly in the 1940s, being cast in a life-saver’s role. While researching her doctorate, Mary visits the Urquhart family’s crumbling home in Cromarty where the events of the Spanish Civil War, Sir Thomas Urquhart’s treasure, a Renaissance desk with a coded mechanism for opening its thirty-two drawers, not to mention servants whose nicknames are inspired by golf jargon and a voyeur maiden aunt are just some of the bizarre details invented by Ohl. For all its Gothic twists, this is a book filled with humour, acute observations of character and place, and literary citations worthy of a professional bookseller – Ohl’s other career. It has been flawlessly translated by Mike Mitchell in what deserves to become another of the latter’s award-winning works.

From rural Scotland to the backstreets of Edinburgh, The Lairds of Cromarty follows the stories of two characters whose lives are closely intertwined - Ebenezer Krook is a defrocked priest looking for clues about his missing father, while Mary Guthrie is a student researching an obscure 17th century writer. There is little to distinguish the narrative voices of Krook and Guthrie from each other, but a strong sense of place and a colourful cast of characters make for an intriguing journey.

Frenchman Ohl fashions an atmospheric and convincingly Scottish whisky-steeped novel in intertwining several stories and paths. Ranging from various isles to the (remains of) the Urquhart estate (complete with secret passages) and more cosmopolitan Edinburgh, and populated with a set of appealingly odd characters (and the occasional apparition), The Lairds of Cromarty is an enjoyable multilayered literary puzzler that works on its several levels -- from plain treasure hunt (the desk and its mysteries) to literary-historical mystery. Thoroughly bookish, it's a nice homage to several writers and many books (as, for example, Jack London's Martin Eden plays an important role), but Ohl also nails the locales.
Good fun, and cleverly done.

M.A. Orthofer in the Complete Review

The Lairds of Cromarty presents us with a thoroughly engrossing mystery as well as an intriguing collection of supporting characters such as Par the butler, or Mary's Aunt Catriona, who watches the citizens of Edinburgh through a telescope, exclaiming loudly at their behaviour. There's even a cameo by George Orwell, for reasons we won't go into here. An absorbing page-turner that defies all attempts to put it down.

Alastair Mabbott in The Herald's Paperback of the Week

If this were merely the tale of the hunt for the lost treasure of the Urquharts, carried out by an odd assortment of characters, it would hold the reader's attention with its brain and wit We have Mary Guthrie, who having, inexplicably, slept with Ebeneezer Krook, a Catholic priest, decides to write her PhD on Thomas Urquhart and travels to Cromarty House, the disintegrating ancestral home, to discover rum goings-on and a 32-drawer desk which slowly reveals its contents using codes. Meanwhile, the priest, now defrocked, is taken up by a group of friends interested in the Urquhart legacy for reasons dating back to the Spanish Civil War because, unknowingly, he holds the key.
Yet Jean-Pierre Ohl gives us much more. The French bookseller from Bordeaux is in love with the Victorian novel and, while his setting is the 1950s, he offers us a pastiche including chapter headings such as 'In which the reader visits Urquhart House and makes acquaintance of its bizarre inhabitants'.
Ohl has called the British relationship with novels unique ' in which the pleasure of narratives is never absent -a long way from the intellectualism which too often characterises French literature'. So while giving his story of secret passages, identical twins and debauched Scottish aristocrats, he adds layers of ruminations on love, death and anything in between.
Mike Mitchell's translation has depth and reach, with Ohl, he creates the density of a Victorian novel, but leavened constantly as the disparate parts of the complicated plot are pulled together. This wonderful, humorous , book should be displayed in all good bookshops.

Jean-Pierre Ohl's The Lairds of Cromarty (Dedalus) is a bulging carrier bag of a novel, a bibliophilic jeu d'esprit, containing the best literary rugby match since Tom Brown's Schooldays, a homage to the International Brigades and a convoluted love story.

Catriona Graham in The Guardian Readers Books of the Year