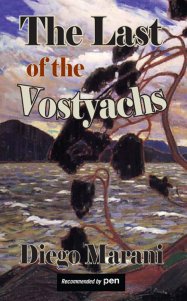 "A 'genius' Helsinki mystery with a touch of The Killing."

" ...So, we have: 1. An intellectual puzzle. 2. A wild man of nature adrift in a big city. 3. A policier set near the Arctic Circle. (If that alone doesn't make you put down your copies of Fifty Shades of Whatever then I despair. It has that Killingesque atmosphere.) 4. Magic, and a sense of the immensity of the primeval universe. 5. An unmistakable dash of humour, even when your nerves are being shredded. 6. Wolves, and a Siberian tiger, let loose from a zoo. 7. A happy ending against all odds. And 8. All hanging together. When I reviewed Grammar, I edged towards using the word "genius" to describe Marani. I'm doing so again now. "

"For Italian fiction in translation, there is nobody more important being published today. This is a beautiful, intelligently funny novel."

The Last of the Vostyachs, Diego Marani's second novel to appear in English, in a dazzling translation from the Italian by Judith Landry, is a riot of comic unpredictability...The Last of the Vostyachs cleverly explores notions of freedom, possession and imprisonment - erudition keeping pace with a rollicking plot. Marani's sentences are controlled explosions of impressionism, his narrative structure a thematic echo chamber.

Landry is an adept translator, of the kind who likes to make it seem that the book has all along been written in English.

The Last of the Vostyachs begins with the guards at the Siberian forced labor camp in which long-mute Ivan has grown up deserting their posts and the prisoners finally able to leave it. Ivan had been brought here as a child with his father, and hadn't spoken since his father was murdered there after trying to escape:

It was twenty years since Ivan had uttered a word, twenty years since the language spoken by the oldest tribe of the Proto-Uralic family, the Vostyachs -- cousins of the Samoeyeds, the wild bear-hunters who once lived in the Byrranga Mountains and whom scientists believed to be extinct -- had been heard anywhere in Northern Siberia.
His background - as a Vostyach and after so many years in the camp -- equips Ivan to survive even in the inhospitable wild once he's free. He largely keeps to himself there; eventually, however, he encounters Olga Pavlovna, a linguist who can hardly believe her ears when she hears him try to communicate, understanding that this represents the missing link in the linguistic theory she's been studying:
They're all there, the consonants which mark the transition between the Finnic languages and the Eskimo-Aleut ones. Even the fricative lateral with the labiovelar appendix ! I haven't finished mapping the phonetic analogies, but will have done so in time for the conference, even if I have to work on my new paper round the clock. So goodbye Samoyedic dialects, hello Vostyach ! If you wanted the Helsinki conference to be a turning point in the study of the Finno-Ugric languages, your wish is granted.
Unfortunately, the person she addresses (here in a letter) and the only one she shares her find with is Professor Jaarmo Aurtova, for whom giving the closing speech at the XXIst Congress of Finno-Ugric is to be a crowning achievement -- in no small part because he plans to definitively conclude that the: "so-called Eskimo-Aleutian hypothesis has been proved to be baseless" and, triumphally, that: "Finnish is Europe's oldest language !" The last thing Aurtova wants to hear about is the existence of a Vostyach language.
With the rather too trusting Olga bringing her prize find to Helsinki, Aurtova sets about sabotaging her -- a plan that includes seducing her. Meanwhile, the survival instincts of wild-child Ivan -- who can't bear to hear Russian spoken and seems to feel more in touch with wild (or zoo ...) animals than humans -- kick in all to well when he's set loose in frigid (and hockey-mad) Helsinki. And then there's also Aurtova's annoyed wife, lamenting to her husband: "You've saved whole languages from extinction, but caused the one we spoke between ourselves to die."
The very different kinds of desperation that motivate Aurtova and Ivan make for a very entertaining and creative comedy of errors, leading both of them elsewhere than they likely ever expected.
Blinded by his ambition, Aurtova throws all scholarly integrity aside in clinging to the theory he has bet his career on -- making for quite the contrast to idealistic (and hands-on) Olga:
'Well, statistics tell us that one of the six thousand languages still spoken on this earth die out every two weeks, my dear,' retorted Aurtova, almost gleefully.
'And with each one that dies, a little truth dies with it,' Olga retorted in her turn, stiffening a little and rubbing her sweating hands.
'Whereas I would say the contrary is true: the fewer there are left, the more we're moving towards the truth, towards the pure language which contains them all,' said Aurtova
Marani twists a great, atmospheric -- alternately frigid and very heated -- story around this in this intellectual, linguistic, and just good old-fashioned-type thriller, culminating in Aurtova going down in flames as he closes what was to be his grand speech-of-a-lifetime with an impassioned, deluded: "Long live Finland ! Long live ignornace !" This -- and many other scenes -- can make you wish for a movie version, but in written form they do nicely too.
There's linguistic theory (and terminology) woven in throughout the story, but that's just one layer of this nicely structured novel, which works well at all its different levels.
Great fun, and highly recommended.

In the Last Of The Vostyachs, the author’s obsessions are still the same, language, it’s purpose not merely as an instrument for communication, but also how it relates to the behavioural codes and cultural values that go to construct ones identity and that not only does language define the characteristics of a specific group or community, it is also the means by which an individual identifies themselves and how they identify with others. Although this time he has used them to create a fantastic clever, funny mystery/thriller complete with a wonderful villain, that you’ll love to hate and whose exploits you’ll be amazed and shocked by, all whilst laughing at him, especially in the end scenes………. but I’ll let you discover the delights of that moment.

Here, satire and farce rub shoulders with linguistic jargon, and comedy blends with grand guignol. Murder most foul stands beside the text of a speech to a congress of linguists. Marani slips effortlessly between styles. Particularly impressive is his command of the intricate details of phonetics. As a final gift to the reader, Marani is beautifully served by the sensitive translation from the original Italian.

Part murder mystery set in the Arctic, part study of language, part Norse saga - though spliced with its own modernity, magic and humour - and part evocation of the Arctic wilderness. Marani's novel shows his extraordinary skills and erudition. He is well served by his translator, Judith Landry, who has produced a novel that appears to have been conceived in English.

Language and knowledge, and authorities' fear of these entities' dangerous ability to unite people, have been recurring concerns in Diego Marani's fiction, notably in his extraordinary novel, The Last of the Vostyachs.

The Last of the Vostyachs was a delight to read.

Jack Deighton in A Son of the Rock