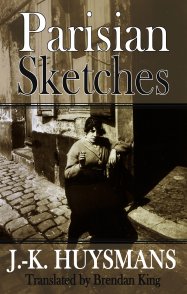 No one, not even Toulouse-Lautrec, was so tireless a tracker of Paris’s genius loci as Huysmans. Like many of his radical contemporaries, he was obsessed by the idea of beauty within the ugliness of back-street Paris, by the thought that the distortions of depravity presented a truer picture of our spiritual nature than conventional religion or revolutionary excess. The excellent introduction to these cameos show how Huysmans saw his art as complementary to the painter’s. As the stories themselves testify, however, the results were not always successful. Compare for example, the sharp impressionistic portrayal of 'A Streetwalker' with the hazy, self-regarding raptures of 'The Overture to Tannhauser', a hyperventilating review characterised by sonorous phrases which pile up and collapse. But his symbolist mode yields as many rockets as damp squibs: 'A Nightmare' is genuinely chilling and oddly exultant. A tale about the wandering Jew is a mini-masterpiece. In this and other pieces, Huysmans begins and ends his tale with the same description - giving the whole the air of a medieval chant.

Murrough Obrien in The Independent on Sunday

A collection of purely descriptive sketches first published in 1880;it is the written equivalent of a artist's sketch of the seedy, bohemian, life-style of the (under)world of the late 19th century Paris, exemplified on canvas by such luminaries as Toulouse Lautrec and Degas. Huysmans' attention to detail: the clothing, complexions, scenery, atmosphere and his rich use of metaphor bring to life the scenes represented. Split into five sections: characters, landscapes, fantasies, still-lifes and paraphrases; each containing several short accounts of different instances. An inspiring insight into another world.

This wonderful collection of short stories is translated by Brendan King, who also provides an informative and helpful introduction. First published in France in 1880, Huysmans was associated with the Naturalist movement which included Zola and Guy de Maupassant. This text includes reproductions of Rafaelli and Forain's original illustrations, as well as charcoal drawings by Odilon Redon which inspired Huysmans to write Paraphrases, the book's conclusion. Parisian Sketches takes the reader back to the Paris of the late 1800s, when the urban landscape was rapidly changing in the grips of inexorable modernisation. Huysmans is our guide through the streets, back alleys and sordid nightspots which bristle with the energy of the day. Indeed, so keen was Huysmans's knack for description, that the writer Walter Benjamin used Sketches as an authoritative means of recreating Paris at this most important artistic and cultural juncture.

First published in the 1880s, this collection of atmospheric journalism reveals the great decadent ('nature is only interesting when sick and distressed') moving from a broadly naturalistic, almost Dickensian style - as in a 1879 account of the Folies Bergere - to the heightened subjectivity of ' Nightmare', inspired by Odilon Redon:'blurred infusoria, vague flagellates, bizarre protoplasms'. An enthusiastic flaneur (if that's not too much of a contradiction). Huysmans created evocative prose-pictures of Parisian life - a visit to the barber, a gloomy railway café, a chestnut-seller - that merit comparison with the pictures of Caillebotte, Degas and Atget.

Christopher Hirst in the Independent

The nouveau journalism(new in 1880, anyway)described people who were artists' subjects - a hefty blonde trapeze artist at the Folies Bergere shaking the safety net, a journeyman baker like a powered Pierrot pummelling flaccid dough with mighty blows. And places, too, out on the fetid edges of a capital that was jerrybuilding distant arrondissements as fast as possible after Haussman had remodelled the ancient rues into grand boulevards. There's a vicious little piece about the Poplar Inn by the blighted river Bievre, which Huysmans conned himself would be a theatre-set-like homely hostelry with tart local wine, and was of course a mouldering dump dispensing big-brewery donkey-piss. Huysmans was a genuine flaneur - no posing and no lounging, he was up and out every day filling notebooks with info we wouldn't otherwise now know about, such as the varied erotic odours of the female armpit before the invention of antiperspirant.

VR in the Guardian

Try, if you can, to imagine a love child from the combined DNA of Irvine Welsh, Will Self, Jeanette Winterson and Stephen Fry. The writing gene is conferred and, as he grows up, the boy exhibits superlative powers of observation, a precocious facility in the use of language, and a tendency to focus on the seamier aspects of modern life. Now imagine this young man dressed in a frock coat and patent leather boots, sent back in time to the 1870s, where he hovers on the fringes of the literary scene in Paris, and you might have a kind of cartoon version of J.K. Huysmans. Huysmans was born in Paris in 1848, the only child of a French mother and Dutch father. He studied law at the University of Paris, and was employed for about 30 years as a civil servant in the Ministry of the Interior. His early work was championed by Zola, unofficial leader of the Naturalist school of writing, and Huysmans soon became a figure at literary salons,known for his 'prose poem' novels which revealed and revelled in sensation and exoticism. Filled with "extravagant obscenities", his books were considered at the time to be an outrage against public morals, but are now compared to Baudelaire, Rimbaud, and Oscar Wilde, and seen as important examples of the Aesthetic and Decadent movements. Parisian Sketches, reissued in an excellent new translation, the first for over forty years, is Huysmans' attempt to "do with pen what great artists have done with brush". It provides a series of recollections, descriptive passages, an impressionistic view of aspects of society we might recognise
today as components of reality television. Here's his take on a session with a topiarist of human hair. "He holds the back of your head now between his two fists and, in defiance of the most elementary rules of hygiene, swings you about with it, first high, then low in quick succession, dangling his beard over your forehead, breathing into your face, examining the mirror to see if your shorn locks are of equal length; he trims a bit here, a bit there, and here again, and then begins to play hide-and-seek with your head, which he tries pushing down into your stomach to better judge the effect of his cutting. The torture becomes intolerable. Oh, where are the benefits of science now, the vaunted anaesthetics, its pale morphines, its faithful
chloroforms, its pacifying ethers?" Huysmans was one of the first to write about his artistic contemporaries, painters such as Degas, Whistler and Renoir, whose work often represented topics Huysmans used in his own novels. His best known books are Against Nature, about a wealthy man's addiction to a life of pleasure; Down There, an exploration of Satanism, both imagined and actual, in Paris and Lyon; and Marthe, on the life of a prostitute.

Suzy Macguire in The Herald

This fine new translation by Brendan King not only reprints some of the eaux fortes of Jean-Louis Forain and Jean-Francois Raffaelli which illustrated the first edition, but also reproductions of Forain's excessively glamorous image of 'The Streetwalker'. Which was suppressed in 1880, and of Odilon Redon's 'Hommage a Goya'series which inspired Huysmans's 'Nightmare' (one of the seven pieces added to the new Leon Vanier edition of 1886, all of which are included here).

Sharing a common milieu that of the Impressionist circle,writer J.K.Huysmans' effervescent portrait of Parisian life in the 1880s captures a moment in time with vivid, sensory precision.Here is the world of the flamboyant Folies-Bergere and the Opera Garnier, showgirls and streetwalkers all filtered through the consciousness of a shrewd observer who paints Paris' vibrant hues with both affection and candour.

A view of Paris in the late 19 Century, Huysmans’ Impressionist-inspired novel sketches the cafes, theatres, slums and street people of the 'City of Light'. Huysmans meticulously records details of lives lit by gas lamps and of fast living. Contemporary sketches of city life are also included.

Kelly Salter in The Big Issue

This is the first new English translation for over 40 years, with contemporary illustrations by Jean-Louis Forain and Jean-Francois Raffaelli, and contains an introduction by Huysmans’ expert Brendan King, and goes to confirm the writer as one of the true masters of 19th century French prose.

GM in The Crack, Book of the Month

Huysmans's accounts of the prostitutes, dancers and drinkers he observed in demi-monde Paris probably inform our contemporary romantic idea of what the city was once about, and his remarkably detailed descriptions of the atmosphere of the Folies-Bergeres create unforgettable visual impressions.

The prose equivalent of a painting by Manet or Degas, this volume of prose pictures predates the journalism of Joseph Roth. Huysmans, the realist son of a Dutch artist, saw life as it is lived and captured it in prose of startling clarity.

Eileen Battersby in The Irish Times Books of the Year

Reading Parisian Sketches, one can imagine the acerbic Huysmans hunched over his desk in a 19th-century garret, crossing out phrases with his scratchy nib in search of the mots justes. For these short pen portraits of the sights and people of the French capital have a visceral use of language and, following in the steps of Swift, no hesitation at using the scatological. He succeeds in his stated endeavour: to do with the pen what great artists had done with the brush...Credit must go to translator, Brendan King, for bringing us such a gem.