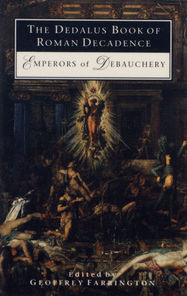 The Dedalus Book of Roman Decadence: Emperors of Debauchery

...devoted to the juicier bits of Tacitus, Suetonius, Juvenal, Apuleius and Seneca (the stuff that, as Gibbon put it, should be veiled in the decent obscurity of an ancient language). But you have to admit it's fun.