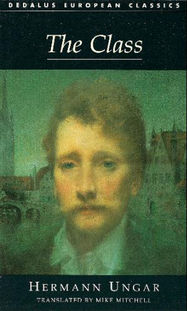 Josef Blau waited. When the boys had gone he stepped out of the dark archway into the street.