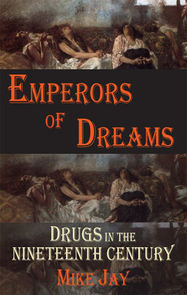 On the 17th April 1799 the young chemist Humphry Davy - later, of course, to become Sir Humphry, the famous inventor of the miners' lamp and distinguished President of the Royal Society-inhaled four quarts of nitrous oxide from an oiled-silk bag in order to study the effects of the gas on his mind and body. These turned out to be considerable.

Davy was twenty-one, the junior partner in an ambitious and controversial medical project called the Pneumatic Institution which had opened the previous month in Hotwells, a declining suburb of Bristol. Bristol itself was in decline, with the newly - independent America stealing much of the trade which had made it England's second city; Hotwells, a spa district originally set up to rival nearby Bath, had become home to a downmarket cluster of cheap clinics and miracle - cure outfits offering hydrotherapy or mesmerism to the hopeful or desperate.

Davy was seated in the Institution's lamp-lit laboratory, in the centre of which he had set up a chemical reaction. Nitrate of ammoniac bubbled in a heated retort; the escaping gas was collected in a hydraulic bellows before seeping through water into a reservoir tank, from which the silk bag could be filled. Also present were the Institution's founder and head, the radical doctor Thomas Beddoes, and another medical colleague, Dr.Kinglake.

Davy emptied his lungs and began to inhale the gas. The first thing he noticed was its curiously benign sweet taste, followed by a gentle pressure in the head as he continued to inhale deeply. Within thirty seconds the sensation of soft, probing pressure had extended to his chest, and the tips of his fingers and toes. This was accompanied by "a highly pleasurable thrilling", and a gradual change in the world around him. Objects became brighter and clearer, their perspectives quietly shifting, the sense of space in the room expanding and taking on strange, cosmic dimensions.

It became rapidly clear that Davy's only analogy for this type of chemical intoxication-alcohol - would be no help at all in understanding what was happening to him. Far from dulling his senses, the gas was elevating them to levels which he had never imagined possible. His hearing became fantastically acute: he could hear every sound in the room and, as he concentrated on the echoing babble, he began to sense that he was hearing sounds from far beyond the room - a vast and distant cosmic hum, the vibration of the universe itself. In his field of vision, the objects around him seemed to be teasing themselves apart into vibrant packets of light and energy. He felt the gas diffusing inside him, inflating him to something far beyond the man he had been a minute before. He was rising effortlessly into new worlds, worlds which had perhaps - until this moment - been the provenance of the gods. Somehow, the whole experience was irresistibly funny. He had "a great disposition to laugh" as everything became suddenly clear, his eye-in-the-sky perspective revealing the answers to questions which he had never had the wit even to ask. He might, like Archimedes, have shouted "Eureka!", but he was too immersed in the moment to shout anything at all.

He continued breathing the sweet gas slowly, deeply, forgetting the presence of the bag in his mouth as the tingling sensations flattened out to a warm, ecstatic numbness which enveloped him entirely, a breathless submersion in an all-consuming intensity beyond words. As new realms of experience opened up before him, he "lost all connection with external things", the stimulus from within his brain itself eclipsing the two-dimensional shadowplay of the laboratory and his companions. Here, thoughts and ideas played across his consciousness at lightning speed: "vivid visible images" presented themselves to him in rapid succession, illuminating patterns and connections previously unimagined. Flashes of insight broke like thunder and lightning around him, ideas crackling across spark - gaps of former ignorance to illuminate an understanding of the universe vaster than any that science or poetry or religion, separately or combined, had ever offered. To breathe the gas was, simply and literally, inspiration.

Davy was far beyond the point where he could choose to end this experience, but after an eternal moment he felt the bag being removed from his lips and Dr.Kinglake leaning over him with a doctor's solicitous manner. The sight of his erstwhile colleague, coming as it did at the end of his unprecedented cosmic journey, struck him forcefully with a combination of emotions. First, indignation that this mere mortal had made the decision to remove the air-bag - a decision taken in complete ignorance of the uncharted landscape through which Davy was travelling. Next, an irresistible superiority to these poor functionaries fiddling with their gas-bags, their tubes and their medical apparatus without the faintest idea of the brave new world at whose portals they were officiating. Next, as the air of the room chased the gas from his system, diffusing its effect out through his fingers and toes, a nervous flash of doubt. What had they seen? Presumably nothing more than a man stupefied, near unconscious, mumbling, giggling, perhaps drooling a little...a lunatic? Was the name of this new world - madness? And since his colleagues couldn't begin to understand where he had been, how on earth could he convince them that he had been there?

As his situation impressed itself upon him, he cast around for a sentence which would encapsulate everything he had seen, done and learnt in the impossibly short time he had been away. It was like trying to cram an ocean into a teacup: the more he tried to formulate what he had seen, the more he felt it ebbing away, back into the dimension from which he was returning. He got up and walked unsteadily round the room. Kinglake and Beddoes were both firing questions at him, asking for descriptions of what had happened, assurances of his well-being. Davy paced, ignoring everything, trying to turn his mind into a vice, to grip the essence of what had happened to him before it slipped away entirely. After a minute or so he turned to them and addressed them with "the most intense belief and prophetic manner" he could muster, in order to sear his revelation into their brains as it had been seared into his.

"Nothing exists but thoughts!" he told them. "The Universe is composed of impressions, ideas, pleasures and pains!"