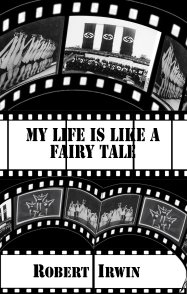 1944. Germany. Despite the promise of 'Hitler's secret weapon' most Germans have come round to the notion that the war is not going their way. Sonja Heda, meanwhile, still has belief and, indeed, is contemplating writing her autobiography, tentatively titled 'My Life Is Like A Fairy Tale'. We learn of her humble beginnings in Holland but, determined to leave the world of waitressing behind her, she up sticks and heads for the glamour of 1920s Berlin. She gets noticed in a café by a film producer and is soon in his bed and getting walk-on parts in films such as 'The Blue Angel'. Despite remaining on the fringes of the industry (she only stars in one film, the - fictional - Nazi-era screwball comedy 'Baghdad Capers') she comes into contact with everyone from Eva Braun to Joseph and Magda Goebbels to Hitler himself. Throughout she gives us a naïf’s-eye-view of evil in a novel which is one of the most curious I have read all year.

Robert Irwin vividly and brilliantly blends the fictional life and all-too-real times of a film star of the Nazi era in this a narrative of diminishing options and the advance to death and destruction. Cultured, clever and funny at times, in a grim Charles Adams way, Robert Irwin’s novel is engrossing and enveloping.
From a dull Dutch childhood in Dordrecht and a waitressing job, sexy Sonja Heda, cigarette in hand, wangles her way on to the film sets of various independent production companies making the films of the Weimar and Nazi eras. From The Blue Angel, The Gypsy Baron, Jew Suss, Habanera and Munchausen she lands the starring role in the Nazi screwball comedy Bagdad Capers.
Although German cinema became a key part of the Nazi war effort, the film industry continued to produce commercial films appealing to the varying film tastes of German filmgoers. Joseph Goebbels at the head of the Ministry of Propaganda propagated Nazi supremacist ideology and indoctrinate the population of Germany though film and radio, not unlike the way reality TV and social media are used today by populist politicians in the US and UK.

'Many a novelist has grappled with the question of how so many seemingly ordinary Germans could have been seduced by, and become participants in, the cruellest political regime in history. Exploring the psychology of opportunism, Klaus Mann’s Mephisto (1936) still remains one of the most successful attempts to find a literary answer, Robert Irwin has provided another. Like his highly acclaimed novel The Arabian Nightmare (1983), My Life is like a Fairy Tale is grounded in meticulous historical research while self-reflexively challenging aesthetic conventions. We see the rise and fall of the Nazi film industry through the eyes of a minor Dutch starlet, Sonja Heda ...

A rare moment of insight arrives after Sonja has been told of the concentration camps:
Perhaps the signs had always been there for her to
see, but she had been too stupid to read the signs.
Was stupidity a kind of evil? Had she chosen to be
stupid? Perhaps her stupidity had made her life
easier. She was now once again in tears. She tried
to tell herself that she was weeping for the Jews,
but something in her was telling her that she was
really weeping for herself and her stupidity.
It all ends badly, of course, including for Sonja. And the final scenes conjure up a powerful apocalyptic atmosphere.’

Not many writers would have the nerve to write a black comedy about Weimar and Nazi Germany, but Irwin pulls it off. The book is frequently funny, usually at the expense of its ditsy heroine, despite the reader’s awareness of how serious the situation is. Sonja’s determination to ignore anything that doesn’t fit with her world view – that she is a talented actress just on the cusp of her big break; that the war is going well and that the Jews are merely being re-educated to make them fit for the better world Hitler and his cronies are engineering – insulates her from what is really going on. It gives her a kind of innocence in a corrupt world, even though darker memories – especially of what really happened at the party on Peacock Island – keep tugging at her.
There are quite a few surreal moments in this novel – usually courtesy of prankster and performance artist Wieland – which add a dreamlike (or nightmarish) atmosphere in a book about illusion and self-delusion. A quirky and unusual view of Nazi Germany, which draws parallels between the illusions created by film and Goebbels’s propaganda machine.

'An entertaining romp through early German cinema as well as a multi-layered examination on the nature of storytelling that has a warning for us all. Another masterpiece from Robert Irwin.'