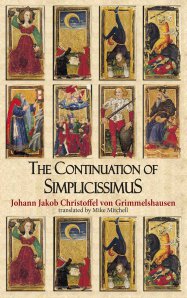 Recent years have seen two English translations of Grimmelshausen’s great novel of the Thirty Years War, Simplicissimus(1668).Neither included the sixth book, published in 1669 as the Continuatio, which purports to explain how the entire work came to be written and underlines the Christian message which provides its framework. Mike Mitchell has now filled this gap with a fluent translation….
Grimmelshausen’s inventiveness is apparent throughout, especially in a curious episode concerning a sheet of paper. When Simplicius takes it to the lavatory for the usual purpose, the sheet protests by recounting at great length how it originated as a hemp-seed and by various painful processes was made into cloth and then, reduced to rags, into a page in an account book. Unmoved, Simplicius consigns the sheet to its destined end, but it warns him that he too is subject to morality and will likewise return to the earth from which he is made
After many adventures, Simplicius winds up on a desert island. Although, unlike Robinson Crusoe, he has no need to work, he opines that ' man is made to work, as a bird is to fly’(an uncharacteristically Protestant-sounding sentiment from the Catholic convert Grimmelshausen) and performs many unnecessary activities to ward off sinful thoughts. Eventually, he spends fifteen years writing his life story in a cave lit by glow-worms. This Baroque allegory of renouncing the world and relying on the light of faith is somewhat weakened inasmuch as Simplicius spends his hermit-like retirement recalling his experiences in the world. Though a questionable moralist, however, Grimmelshausen, here as always, is an entertaining storyteller.