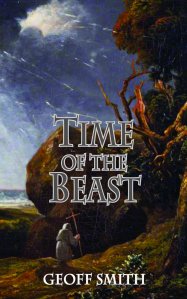 It's Smith's knowledge of the time that makes his story so believable, so immersive; there isn't anything here that seems out of kilter. The concept of native British shamans is beguiling (be prepared for a bit of church-bashing as the ministers of the new religion shudder at the notion of people enjoying themselves: every pleasure is a temptation from Satan), as is the notion of pockets of the country where its original inhabitants still lurk – along with people who are even more weird and ancient than them (the last Neanderthals, it is hinted at). In short, you're transported back in time, and it's the kind of book you might find yourself wishing were longer.

It is 666AD and Athwold leaves his East Anglian monastery to became, at the age of 25, a hermit in the great marshland of the Fens. A daunting prospect in that somewhat forbidding territory even today but even more so then when there was less delineation between land and water. Athwold not only has to battle the terrain and the conflicting forces of paganism and Christianity but also his own inner turmoil when faced with love and desire. Throw a warrior-monk, Cadroc, and a mysterious otherwordly killer into the mix and the story takes on terrifying twists as it races towards a very satisfactory conclusion. This is a fascinating little book fewer than 250 pages but you might be left wishing there were more. This an excellent debut novel.

In 666 A.D., Athwold, a young monk who has found himself at personal and doctrinal loggerheads with his abbot, leaves his monastery to go and live as a hermit in the dank and sinister semi-flooded Fens of eastern England. The inhabitants are mostly as mysterious and threatening as the landscape, but Athwold finds his monastic vows under threat from the beautiful Alisa. Soon, though, there is no room in his mind for anything except fear of the vile and powerful monsters who seem to have selected him for constant and merciless attack. When all is at its worst, Athwold is rescued by the wandering monk Cadroc and his local guide Alfric. Together the three set out to stalk and destroy the greatest monster of them all.
The atmosphere of the Fens in a truly Dark Age world is very effectively evoked, as is the mindset of the time. While we recognise some of the terrors that the characters encounter as being no more than natural phenomena, the people of the time do not. I thought that Athwold’s epiphany and change in his life at the end was not quite so plausible, but Time of the Beast unusually combines fine writing with a series of properly horrid revelations. Recommended.