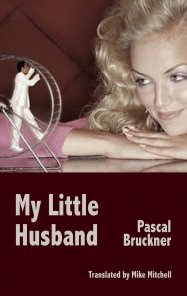 A controversial French philosopher, Pascal Bruckner has long dabbled in a variety of literary forms: essays, polemics, novellas. Best known in Britain for his outré novel Bitter Moon, later turned into a film by Roman Polanksi, he has taken a Swiftian turn. In an earlier novel, The Divine Child, he wrote about a foetus who refused to leave the womb, while this new satirical discourse ponders the fate of an incredible shrinking man.
The diminutive Leon is the toast of Paris when he marries Solange, a tall and talented dental surgeon. He might be six inches shorter than his bride, but it's nothing that flip-flops as "thick as twelve-ounce steaks" can't hide. Happy to ignore the rude remarks about the union of a "giraffe and zebra", he gets on with siring his first child. But six weeks after the birth, Leon starts to notice serious "shrinkage" – his jackets reaching down to his fingers and his T-shirts "as voluminous as a bathing wrap."
Luckily for the couple, there's one vital organ that remains unaffected – indeed, it is so freakish in size that it has to be tucked away in a "sort of string bag". Unfazed, the lusty Solange continues to delight in her husband's nocturnal abseiling and soon more progeny are on the way. Yet with each new confinement, Leon loses further inches. Now always under his family's feet, he's forced to traverse the polished floors of his apartment in a toy 1940s Jaguar drophead coupé.
The bizzare details of Leon's miniaturised life are comically rendered, but a darker sensibility is at play. Never a fan of political correctness, Bruckner in this jeu d'esprit develops a less than whimsical meditation on masculinity, marriage and parenting. As Leon's therapist reminds his pint-sized client: "You must realise, old chap, that every woman turns her husband into a child. It's the story of every marriage… At first he's My Wild Beast, then My Pet, finally My Baby."

Emma Hagerstadt in The Independent