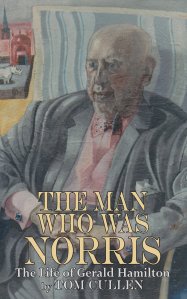 With a cast of characters that includes Roger Casement, Edmund Backhouse, Aleister Crowley, Alfred Douglas, Rudolf Hess, W.H.Auden, Diana Mosley, Brian Howard and Guy Burgess, Cullen could scarcely go wrong. Still, The Man Who Was Norris proves hilarious and worrying on every page. It is joyfully incredible, campily anarchic - and crying out to be turned into an opera.

Richard Canning in The Literary Review

If Dylan Thomas had three lives, Gerald Hamilton, Christopher Isherwood's 'Mr Norris', had so many as to make Tom Cullen's highly entertaining The Man Who Was Norris seem the story of a real-life twentieth-century Flashman with a dash of Robertson Davies. Hamilton's early conversion to Catholicism didn't stop him duping both Benedict XV and Cardinal Montini, the later Paul VI

The great thing about this book is that Cullen rarely makes the mistake of taking Hamilton (once described as ‘the wickedest man in Europe’) at his own word... Baker notes Hamilton’s Zelig-like propensity to pop up at historically significant events, and Cullen’s book is among other things a kind of alternative account of the 20th century viewed through the distorted prism of his subject’s monstrous but engaging character. Well researched, properly sceptical, written in a nicely relaxed style, and often uproariously funny, this is absolutely the biography Hamilton both needed and deserves.

Peter Parker in The Spectator

One of the great characters of 20th century literature, Isherwood’s Norris was a raffish but charming swindler. This long-lost biography of Gerald Hamilton, real-life model for Norris, reveals that Isherwood didn’t tell the half of it. We learn that Hamilton, aside from having exquisite manners and a gift for le mot juste, was interned in both world wars, imprisoned for bankruptcy and jewelry theft, and feared even by Aleister Crowley (“Be bloody careful!). With acquaintances ranging from Guy Burgess to Sir Oswald Mosley, he is the most entertaining company, at least on the page if not in reality,

Cullen is good, too, at conveying the charisma his subject wielded to dupe otherwise discerning people - a charisma which enlivens these pages already rife with titillation and scandal.

Christopher Isherwood’s 1930s novel Mr Norris Changes Trains was about a British chancer in between-the-wars Berlin. This is the tale of Gerald Hamilton on whom the character of Norris was based. Hamilton was one of the few to be interned in England during both wars andCullen has used no little effort in sorting out myth from truth. He has established that although he did not know Roger Casement, Hamilton was gun-running to the IRA in the 1920s. He was not linked to all the European royalty with whom he claimed affinity but he did share an apartment with Aleister Crowley. Also linked to Oswald Mosley, Hamilton’s ‘“loyalties”’ over the course of his life, spanned a spectrum from libertarian communism to racist fascism. Although it is questionable whether he had any strong ideals, he had many judicial convictions with a good few spells in nick.Using the zany life of a sociopathic rogue, this is a gossipy illustration of the miasma which surrounded the wars. It is an enticing and chuckle-out-loud read.

Joseph Crilly in The Irish Times

Originally blocked from publication for legal reasons in the late 1970s, Cullen’s fascinating biography explores the life of “chameleon” Gerald Hamilton (1890–1970), the inspiration for the title character of Christopher Isherwood’s novel Mr. Norris Changes Trains. Described, even by friends, as a “wicked” man, Hamilton could be as nasty as he was charming. He befriended Isherwood, was jailed for gross indecency, and meticulously chronicled his homosexual dalliances. Hamilton was also an anti-Semite, a suspected spy for the French, and a German sympathizer imprisoned by his own government during both world wars. He was frequently in debt and bankrupt twice. But to many, Hamilton was an oddly charismatic, if enigmatic, eccentric. Cullen presents his colorful subject as a master of witty bon mots and recounts lively, gossipy anecdotes about Hamilton’s conversion to Catholicism (made, according to Hamilton, mostly to shock his anti-Catholic father), friendships with the likes of Lord Alfred Douglas and Aleister Crowley, and stint as a body model for a Winston Churchill statue. The book’s parts prove greater than the whole, but readers will still be pleased to have met the scandalous Hamilton.

Is this the ultimately depressing story of an aimless socio- pathic egoist, or the colourful tale of someone who lived life, albeit unscrupulously, to the full? Both interpretations—and others besides, no doubt—are equally valid. That is what makes The Man Who Was Norris so fascinating and thought- provoking. It is clear that Hamilton himself, despite some desperate moments, derived a good deal of enjoyment from his life. He spent a great deal of money, only some of it his, and had a great deal of sex, again only some of it his, because, at least in later life, he preferred watching. He was on intimate terms with Royalty and several Popes, as well as with thieves, terrorists, con-men, drug-addicts, pimps and prostitutes, and contrived to be most of these things himself. He knew ‘the wickedest man in the world’, Crowley; but was also described as such in newspapers by his ‘friend’ Robin Maugham. He was a magnificent demonstration of the unfathomable strangeness of human nature. Phil Baker is to be thanked for unearthing this excellent study of an astonishingly odd man and having it published.