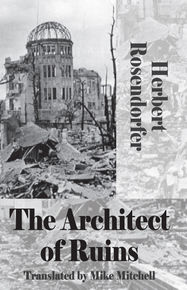 This novel was actually published in 1969 by the German author Herbert Rosendorfer, but this translation (by Mike Mitchell) has now seen it made available to an English speaking audience. It’s an end of the world fantasy and in it four men, led by the Architects of Ruins, construct an Armageddon shelter, in the shape of a giant cigar, so that when the end of the world does come, they can enter eternity in the right mood, while playing a Schubert string quartet... They amuse themselves by telling stories which take on a life of their own, with walk-on parts for Faust, Don Juan, da Ponte and G. K. Chesteron, with a narrative that flashes back and forth between the Dark Ages and The Modern Day. It’s all very clever clever, Kafka-esque in parts with its box-in-a-box structure, and consequently not what I’d term a page-turner. It’s very inventive however and many of the ideas and situations contained within it, will stay with you long after you’ve closed up your time here.

Last November, the German author Herbert Rosendorfer(born 1934) won the Corine Prize for life-time achievement, a Bavarian award previously given to Nadine Gordimer, Imrie Kertesz and Amos Oz. That role of honour could lead readers who approach The Architect of Ruins never having read Rosendorfer before to expect something more melancholic than this dizzying, highly enjoyable escapade, which is one of four Rosendorfer translations published by the doughty independent firm Dedalus.

We meet the novel's unnamed narrator on a train to Lourdes. Eventually finding an empty compartment-there are six hundred nuns on board - he stretches his legs and feels someone grab his feet, stowed away under the seat opposite. A disarmingly courteous exchange ensues in which our narrator's travelling companion reveals himself as a conman peddling an implausible get-rich-scheme. He is on the run after organising a pockpocketing racket at a peep show. Police arrive and he escapes, leaving behind a scrap of paper mysteriously covered in dots. Is it a code?

No, it's a McGuffin. Questions of meaning aren't on the agenda;our only job is to enjoy the ride. In an abrupt shift typical of the novel's structure, no sooner does the fugitive make a break for it than we find our narrator exploring a rural idyll, and savouring the cold beer handed to him by an old man who tells him the story of a dissolute Scottish king who likes baking his stable-wenches into a pie. The next thing we know, we're on a steamship in the company of Dr Weckenbarth, the eponymous Architect of Ruins, who is the brains behind a cigar-shaped bunker that runs deep into the earth, designed to shelter three million people from an anticipated nuclear fallout.

The novel concerns itself less with the fear of the bomb than with getting lost in a maze of storytelling. The narrative, nested like a set of Russian dolls, offers a surfeit of plot, as the steamship's passengers swap increasingly outlandish tales. Before Weckenbarth can explain his construction to the narrator, he gets sidetracked by an anecdote about a Milanese paediatrician who establishes an apocalyptic cult that is in thrall to psychic communications from his deceased sister. Digressions follow digressions...

Rosendorfer's matter-of-fact style(as read in Mike Mitchell's English) heightens the humour as well as the horror. One of the very best stories concerns a bungling bureaucrat named Heino Pramsbichler who helps run a sinister 'deovulation' iniatitive. Falling for a patient named Emma, he tirelessly but mistakenly woos her twin sister, Bobbi, with the aid of funds embezzled from his elderly lodger. Of course, Bobbi isn't sterilised; a detail that leads to some catasphrophically grisly comedy.

The end of the book, the narrator is back on the train, having just witnessed a human sacrifice and been cuckcolded by dildo-wielding dwarves. Was it just a dream? After this shaggy-dog story that collapses time and space, melding postmodern literary gamesmanship with elements of science fiction and fantasy, we're none the wiser. But it's certainly good, morbid fun.

Anthony Cummins in The Literary Review