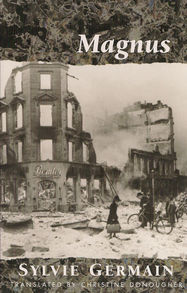 Sylvie Germain is the Vincent Gogh of our age.

Shaun Whiteside in The Independent

A tale of evil, love and tragedy, Magnus straddles years and continents in the poetic, voluptuous fashion that anyone familiar with Germain or her publisher Dedalus might expect. For those who aren't, this vital independent publisher is an indispensable source of the gothic and decadent, without whom English-speaking readers would have no access to several novels by this precocious French writer.
Told in a series of fragments and notes, interspersed with quotations from various poets and intellectuals, the novel watches as its protagonist pieces together clues about his identity, beginning with a turbulent childhood, brought into the world by leading Nazis at the end of the Second World War.
His story is revealed to us as it is revealed to him: subtly and through interwoven memories and events. As our hero understands more, so the novel’s idiosyncratic style intensifies, heading further into Germain's unique territory for the - the uninitiated would be well advised to start here.

Close to the end of the Second World War, a young boy afflicted with memory loss flees Nazi Germany with his mother and father. A teddy bear named Magnus is the boy’s only tangible possession, the one item linking him to moments he can no longer remember. After his father vanishes and his mother becomes mentally unstable, the boy is sent to live with relatives in England. While at university, he journeys to Mexico, where he uncovers a dark secret from his family’s past, propelling him thereafter to take the alias Magnus. As he continues a life journey that spans continents and years, this restless, inquiring soul matures, learns, and loves, all the while yearning to unravel the mystery of his true self. Magnus’ story is told through “fragments,” “notes,” and “resonances,” which gradually piece together the nonlinear periods of his life. Award-winning French writer Germain’s vibrant narrative is interspersed with poetry by Paul Celan and Shakespeare and slices of prose by Juan Rulfo, which makes for a mystical and passionate mosaic of identity, myth, and memory.