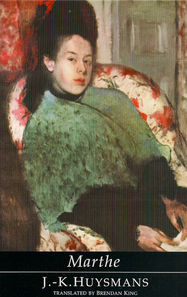 Huysmans was part of Zola's coterie of naturalist writers driven by a desire to break from the dominance of romantic fiction.Certainly this tale set in a brothel, his debut novel banned at publication in his native France in 1876, would be fertile ground for such a venture. The translation, its first in 50 years, is wonderfully bawdy and a fine tribute to a great work.

The first new translation for 50 years of Huysmans' first novel,which won him the attention of Zola and a place among the Naturalist movement.It's a callow, melodramatic work with a rushed ending, but paints a warmly evocative picture of a young Parisienne prostitute and her selfish lovers. Although not in the same league as Against Nature, you can see the origins of it here.
Flitting from brothel to theatre to kept mistress, with the threat of utter destitution never lifting.Marthe's sad existence crushes her natural spirits into apathy.
Supposedly artist Leo, who supposedly loves her, hardly helps with his lofty ideals.
Brendan King's slangy translation is a bit muddled at time - ' OK' bumps up against'Ooh, I say!' - but does bring out the vivid,earthy language of the 19th-century demi-monde.

Originally published in 1876, this is a translation of the pioneering French classic. Marthe became Huysmans' landmark novel, culminating a Parisian demimonde setting with the portrayal of a would-be-actress, turned prostitute. Unique in its day as one of the earliest to deal with the theme of sex in exchange for money. Prepare to be led into some of the lowest dens and dives in the whole of Paris to be told the tale of Marthe and her brief relationship, ultimately doomed from the start.

It is a tragic novel, and sorrowful in part, as one would expect of a prostitute's tale in the nineteenth century and includes infant mortality, starvation, and poverty. However, Huysmans's beautiful portrayal of Marthe, a young woman of the night, is both sympathetic, and incredibly modern. The wonderful way in which he writes eclipses the traditional boudoir scenes of the era. One can almost touch the wallpaper, smell the musk of body sweat and alcohol, and lives the lives of those complex and very colourful characters.