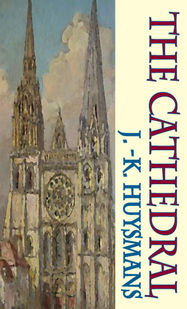 Durtal extols the flaming raptures of the mystical Gothic, tries to comprehend the stone text of Chartres and is extremely funny about the horrors of living in the provinces, although equally viperish on the subject of Parisian literary life. These books mark a 19th century spiritual journey undertaken by a very modern sensibility; Durtal's wicked, witty, self-lacerating voice could be that of a contemporary medieval scholar with a bad case of mystical anomie.

To get at that truth which is…the deepest meaning of beauty, to find that symbol which is its most adequate expression, is in itself a kind of creation; and that is what Huysmans does for us in The Cathedral. More and more he has put aside all the profane and accessible and outward pomp of writing, for an inner and more severe beauty of perfect truth. He has come to realise that truth can be reached and revealed only by symbol.

The Vatard Sisters is worth reading, especially for the sidelights it casts on the vibrant, pullulating working life of the capital; it is also recognizably a nineteenth-century novel with characters and a plotline. The Cathedral is more for those fascinated by the enigmatic Huysmans, whose own fascination with himself surpassed everybody's. His fears and allergies, spiritual turpitudes, lusting misogyny, hair-raising dream life and didactic erudition, from A Rebours on, take centre stage. Thanks to the effort of Brendan King, and to Dedalus Editions(who first published Clara Bell's translation of La Cathedrale in 1989), we now have in English two further documents, usefully annotated and illustrated, to add to this florid case history.