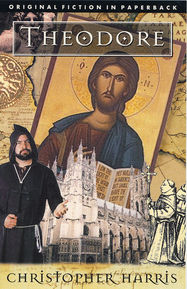 Theodore of Tarsus-who became Archbishop of Canterbury in 668 - was a significant figure in ecclesiastical history, and his story is told in this well researched first-person novel what follows is an interesting account of the homosexual saint's life during strange and turbulent times.

At its heart, however, Theodore is a beautiful and poignant love story, examining the passion between twin souls - a love too intense to remain chaste. The author challenges us to consider that while Christianity owes a lot to such love, it will never acknowledge the debt.

Murrough O'Brien in The Daily Telegraph

It portrays the young Theodore as curious, sensual and very human, anxious to understand what exactly constitutes enlightenment, assailed by religious doubts and constantly at odds with the frequent irrational beliefs of the religious men surrounding him. The greatest strength of Harris' novel is the clear and simple presentation of its often complex moral ideas. Ultimately, this is a novel of curious decency, simply and movingly written by a first-time author of real promise.

Christopher Fowler in the Independent on Sunday

The fictional memories are both moving and inspiring in their honesty and the text is a compelling read.Theodore's sexual revelations and religious self scrutiny draw the reader into a world far removed from our own yet develops themes relevant to these times.

The headline 'Archbishop of Canterbury in Gay Sex Shock' may be every tabloid editor's dream, but, in the seventh century, it was a reality, at least according to Christopher Harris's first novel. However speculative the premise, Harris's research is impeccable and he displays remarkable organisational abilities in chronicling the life of Theodore, first as a clerk in the service of Emperor Heraclius, then as archbishop at 'the world's misty northern edge'. The theological debates on the nature of the incarnation are somewhat fusty, but the scenes of war and episcopal intrigue are vividly described. Despite the novel's lack of an authentic sounding voice, its very modernity underlines its relevance for the self-deceptions within today's Church.

Michael Arditti in The Times