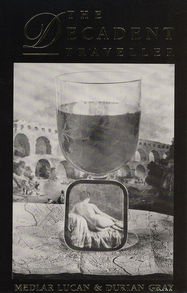 For those unacquainted with Lucan and Gray's act, the pseudonymous pair write in character as two peripatetic Wildean flaneurs, driven by the stylistic flair and pleasure seeking values of the late 19 th century Decadent and Aesthetic movements. Here they travel to Cairo, St Petersburg, Tokyo, New Orleans, Naples and Buenos Aires, sampling en route extremes of excess and perversion, and all the way quoting such fellow travellers as Baudelaire, Flaubert, Crowley, Verlaine and Huysmans.

Readers of their debauched anthologies on cookery and gardening will welcome this clever, tasteless and very funny account of their journey across the globe, following in the footsteps of Flaubert and Aleister Crowley amongst others.

Anthony Sattin in The Sunday Times Books of the Year

More from the pseudonymous duo who brought you The Decadent Cookbook and The Decadent Gardener, and with no sign of the quality flagging. This is Funny Christmas Paperback of the highest intellectual calibre. And frequently nauseating with it.

Culinary, sexual and sensory misadventures in St Petersburg, Cairo, Tokyo and elsewhere will delight fans of this pseudonymous duo.

At long last, however, I have discovered an antidote to my cynicism in the form of the third Medlar Lucan and Durian Gray's Decadent series. While masquerading as a spoof on travel writing, this small volume is, in fact, a treasury of interrelated historical references, literary quotes and philosophical musing - all, of course, with special reference to sex, death and over-indulgence. Avoiding the cities traditionally associated with sybaritic luxury, the authors head for St Petersburg, where they muse on the prodigious sexuality of the Empress Catherine and the economic dominance of the Russian Mafia; Naples, where the writings of de Sade and Wilde provide them with a guidebook to the city; and Tokyo, where they are struck by the links between classical Japanese art and the erotic Manga comics so beloved of today's apparently straightlaced commuter. The fabric of this highly eccentric tour of historical and actual carnality is leavened by nice touches of black humour - the comparison of Gatwick Airport's departure lounge to the nine circle of hell in Dante's Divine Comedy left me weak with rueful laughter. After reading this, returning to standard-issue travel writing is going to be tough.

Natasha Hughes in The Traveller Magazine

Dedalus specialises in books about decadence, and a recent addition to its wonderfully singular list is Medlar Lucan and Durian Gray's sublimely witty The Decadent Traveller, a highly diverting pastiche of a travel memoir.

Peter Burton in The Gay Times