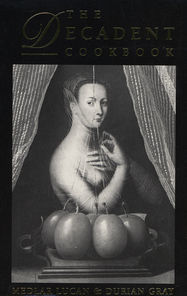 The chapter headings say it all: Corruption and Decay; Blood, the Vital Ingredient;The Gastronomic Mausoleum; and I Can Recommend the Poodle. This is a not a normal cookbook but a slightly sinister and highly literate feast of decadent writing on food. There are dishes from the tables of Caligula and the Marquis de Sade, a visit to Paris under siege (when rat was a luxury), some unexpected uses for cat food and some amblongous recipes from Edward Lear. There should be something here to delight and offend everyone: the recipes for cooking with endangered species looking particularly tasty. Mouthwatering.

If meat is the hard-core of food- as- sex, The Decadent Cookbook is a walk on the wild side, a book for those who scorn not only the Prohibitions of Leviticus but also the dictates of common sense, good health and kindness to animals.

John Ryle in The Guardian

The putative authors are Medlar Lucan and Durian Gray, a bit of a tip-off: the medlar is a small, brown fruit, eaten when decayed; the durian fruit tastes goods but smells like sewage. These two coves left editors Alex Martin and Jerome Fletcher to tidy up this compendium of hideous repasts, taboo-busting banquets, and surprisingly sensible fare, accompanied by passages from decadent literature: menus courtesy of the Marquis de Sade, J.K.Huysmans, King George IV, the Grand Inquisitor and other gluttons.

Not just fun but useful, containing workable recipes for Panda Paw Casserole, Cat in Tomato Sauce, and Dog a la Beti ( "prior to being killed, the dog should be tied to a post for a day and hit with smallsticks, to shift the fat in the adipose tissue"), myriad blood sausages recipes, a recipe for aye-aye, of which some 20 remain in the wild, and stories by Louis de Bernieres, Huysmans, inevitably, and Charles Lamb on sucking pig. Not as you will have gathered, for the squeamish.

As a cookbook, this as authentic as the authors' Christian names (two varieties of rather decadent fruit) and is actually a very funny anthology of the best and worst excesses in gastronomy. Excerpts from literature are peppered throughout, from the gastronomic desires of the Marquis de Sade to the curious case of a man obsessed by cat food. A passage from L'anglais Decrit Dans Le Chateau Ferme' starts: ' The shit was very tasty. I helped myself to as much of it as I had the fish sperm.' Whole chapters are devoted to sausages, and blood, with a number of excellent recipes featuring that most decadent of fluids. For those of a morbid and liberal persuasion, this book is essential reading. For those who also possess streaks of cruelty, it would make a lovely gift for a vegetarian or a maiden aunt.Wicked recipes, but not for the faint-hearted.Dead decadent.

WARNING! Do not read on if you fall into the category of vegetarian or squeamish fainthearted. Ever wondered what panda paw casserole smells like? What about the wafting odours of cat in tomato sauce, or New Zealand parrot owl pie? 'Mmm lovely, ' is unlikely to be the response unless you are nasally-challenged. Entire chapters of this tome are devoted to blood and other bodily fluids, with one titled:'I Can Recommend The Poodle'. Check out the recipe for Manila Hot Dog. Take refuge in the risque literary excerpts that pepper this most outrageous of cookery books.

Ann Donald in The Glasgow Herald

The Decadent Cookbook is guaranteed to make your table a talking point again. But be warned, with chapters entitled 'I'll Have The Poodle' and 'Marquis de Sade's Sweet Tooth', this is no ordinary fare. The authors' advice is to forget traditional food snobbery - there's no good reason why dogs, cats and even rats shouldn't appear on your supper table, apart from a lack of good recipes. To remedy this deficiency, they offer instructions for dishes such as flambéed liver of dog and cat in tomato sauce. But the height of culinary delight is reserved for endangered species. How about panda paw casserole, black bear sausages, or parrot owl pie (based on a recipe for parakeets by Mrs Beeton)? So there you go, all the perfect ingredients for an evening of sparkling wit and champagne. Just remember to tell your guests to bring a doggy bag.

David Batty in The Big Issue

Lucan and Gray, whose fruity monikers may strike some as being suspiciously apt, have concocted a fabulous and shocking assemblage.

Christopher Hirst in The Independent

...arresting, too, is The Decadent Cookbook (including a recipe for cat in tomato sauce).

Nigella Lawson in The Times Books of the Year

Start with a glass of blood, to set you up: recipe given in Jean Lorrain's short story, helpfully included.

John Bayley in The Standard's Books of the Year

Forget Prue Leith and Delia Smith the cookery manual that every Venue reader needs is The Decadent Cookbook. If your palate is a little jaded, if you thought you'd tried everything, then this is the book to make your smart dinner parties go with a bang (and several yech!s). The pseudonymous authors have trawled through the world's great works of history and literature to assemble a truly sumptuous feast of decadent dishes and ghastly gastronomy.

Sean Hughes in The Observer

An extravagant, shameless and highly entertaining book that could change the course of contemporary cuisine.

Dedalus is serious about decadence. It has published two general anthologies, a book of Roman decadence and one of German. Best of all is the Decadent Cookbook, which includes a 'gastronomic mausoleum' and a chapter on 'Blood, the Vital Ingredient'.