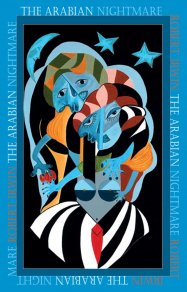 Robert Irwin is indeed particularly brilliant. He takes the story-within-a-story technique of the Arab storyteller a stage further, so that a tangle of dreams and imaginings becomes part of the narrative fabric. The prose is discriminating and, beauty of all beauties, the book is constantly entertaining.

Hilary Bailey in The Guardian

Robert Irwin writes beautifully and is dauntingly clever but the stunning thing about him is his originality. Robert Irwin's work, while rendered in the strictest, simplest and most elegant prose, defies definition. All that can be said is that it is a bit like a mingling of The Thousand and One Nights and The Name of the Rose. It is also magical, bizarre and frightening.

Irwin writes with great charm and suave wit, and almosts compels us to believe that in nightmare - though nightmare it is - there is such wonder and such plenitude as would make a fool of any man who preferred jejune
reality. There is no greater achievement at which the literary fantasists might aim.

At one stage in this labyrinthine narrative, a character complains 'things just keep coming round in circles'. The form of this clever tale owes something to The Thousand and One Nights. The subject matter is exotic and Eastern, the episodes linked tangentially and mingling one into another. Into the thread of the stories, Irwin injects discussions on sexuality and religion. However, since dreams, as we are shown, are themselves a deception, then the philosophical points must necessarily be falsehoods. The invention is exhuberant, but the author manages to keep control to stop everything lurching into shapeless indulgence. The result is a unique and challenging fantasy.

...a classic orientalist fantasy tells the story of Balian of Norwich and his misadventures in a labyrinthine Cairo at the time of the Mamelukes. Steamy, exotic and ingenious, it is a boxes-within-boxes tale featuring such characters as Yoll, the Storyteller, Fatima the Deathly and the Father of Cats. It is a compelling meditation on reality and illusion, as well as on Arabian Nights-style storytelling. At its elusive centre lies the
affliction of the Arabian Nightmare: a dream of infinite suffering that can never be remembered on waking, and might almost have happened to somebody else.

Deft and lovely and harder to describe than to experience... the smooth steely grip of Irwin's real story-telling genius The Arabian Nightmare is a joy to read. If Dickens had lived to complete The Mystery of Edwin Drood, the full tale when told might have had something in common with the visionary urban dreamscape Robert Irwin has so joyfully unfolded in this book.

It is difficult to overpraise or over recommend this bizarre and
challenging book .... It's a philosophical fantasy, a literary Chinese puzzle, a romance that combines dreams and theology, philosophy and sex.Intelligent, thought provoking and funny, like a darkly magical The Name of the Rose. Don't miss it.

Anne Barnes in The Times

...somewhere between a Borges' Labyrinth and a late Bunuel movie.

Giovanni Dadomo in Time Out

As with all great 'Oriental' tall-tale-tellers from Sir John de Mandeville to Borges, it's impossible to tell where the real erudition ends and the imaginary begin (part of the fun of course). The Nightmare itself is a conceit worthy of Borges.

Irwin has a sure touch that his example of the tale-within-a-tale, which occupies most of the latter part of the novel and eventually folds into it like a literary moebius strip is one of the finest virtuoso performance in fantasy fiction .... an enormously impressive work. It is certainly one of the best fantasy novels of the last twenty years, and in time to come will
surely be "rediscovered" and elevated to classic status. No one with a serious interest in the genre should miss out on it.

If Borges and Dick had got together to update The Arabian Nights as a horror novel... I liked it a lot.

First published in 1983, this fantastical work has echoes of Calvino and Borges. Balian of Norwich arrives in ancient Cairo and is the subject to insomnia and a form of narcolepsy, during which his nightmares assume terrifyingly realistic form. Irwin uses his knowledge of the Arabian Nights to construct a nest of tales. The mysterious Egyptian streets serve as the perfect backcloth for a mystery that will weave a spell for anyone who enjoys less straightforward narrative.

Now regarded as a modern classic, The Arabian Nightmare was first published almost two decades ago and still maintains a fascinating hold on the psyche of its readership. With a labyrinthine narrative encompassing philosophy, sexuality and religion all in a dreamlike state of consciousness, this is at times indulgent and at others frequently brilliant. An exotic setting of Cairo encapsulated by the oriental storytelling showcased in the Arabian Nights this historical fantasy is highly imaginative and very addictive. A veritable literary hall of mirrors and sometimes a chamber of horrors it is unique to behold.

The invention displayed here is awe-inspiring.

I have friends who love smart, deep fantasy novels, and can never find enough. Robert Irwin's novel The Arabian Nightmare was one of my favourite books of the early 1980s and one of the finest fantasies of the last century. His newest novel, Wonders Will Never Cease, is as erudite and well-constructed a historical fiction as The Arabian Nightmare, but is set in a medieval England that never quite was, and uses stories and fictions to illuminate and to make us gasp with awe. It's also often genuinely funny and quite beautifully written.

Neil Gaiman in Authors at Christmas

'A masterpiece of historical fantasy and fetid imagination.'

Mark Sanderson in Time Out

'One must allow oneself to be dazzled by this fable about sleep whose virtuosity so delightfully stimulates the intelligence of the reader. It will seduce the whole world, the heavy sleepers as well as the insomniacs.'

'Brilliant paranoid fantasy set in the Cairo of Qaitbey, where a Christian spy contracts the afflicition of the title. As his madness deepens, reality and illusion spiral inwards like an opium-drugged walk through the medina of the mind.'

The Rough Guide to Egypt

'... like an intricate chinese box, delights with each unexpected combination and hidden drawer.'

' I've never read anything remotely like this book. It has affinities with Borges, as well as Kafka, plus the original Arabian Nights. The writing is meticulous, elegant and mesmerising. Anyone who relishes the darkly exotic and unusual should read it.'

'Irwin combines his erudition on the Middle East with conventions of Western fantasy to explore the boundaries between dream and story.'

The Oxford Companion to Fairy Tales

' This is easily one of the most intelligent adult fantasy novels I have ever read. Brilliantly written, this is one of those rare books that you'll remember at odd moments years after you have read it.'

' Irwin's endless chamber of mirrored horrors is one of the very best.'

'...the novel is itself something of an initiation, conducted with verbal panache, lightly worn scholarship and lively invention.'

Peter Vansittart in The London Magazine

' The Arabian Nightmare is a thoroughly modern fantasy cast in a classical mould...Irwin brings to this task a remarkable freshness of outlook;he enlivens his consideration of the nature of dreams with ideas drawn from modern psychology, and he fills out his marvellous descriptions of 15th-century Cairo and its dream analogue with details drawn from the illuminating perspective of modern historical studies.'

'... a novel to be experienced rather than read, an exhilarating philosophical rollercoaster ride.'

Irwin’s 1983 classic combines the genres of travelogue, fable, dream narrative, novel and confessional into one beguiling whole. Balian, an English spy hired by France to go on a fact-finding mission to Cairo in 1486, is surprised when one of his fellow travellers is kidnapped. He is even more surprised when he is afflicted by the "Arabian Nightmare": he begins to have very confusing dreams and wakes up bleeding from the nose and mouth. A mysterious figure named the Father of the Cats claims to want to help Balian—but does he? To make matters worse, there are rumours that a vicious murderer is on the loose in Cairo. Every attempt Balian makes to leave the city is foiled, as one supposedly well-intentioned figure after another leads him into the ever-deepening maze of the city's underworld, populated by whores, laughing dervishes, talking apes and lepers who all weave their respective spells with distinct power. Moving gracefully through a boggling number of reversals, stories-within-stories, and false solutions, the narrative winds its way toward a conclusion as baffling and profound as everything that has preceded it. There are plenty of moments when the story becomes too confusing to follow—but this is clearly part of the plan. A work of fiction with the subtle, intoxicating architecture of a poem, this cult favourite clearly deserves renewed exposure and consideration.