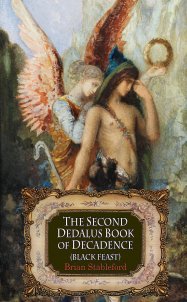 INTRODUCTION: THE PHILOSOPHY OF DECADENCE

The principal inspiration of the French Decadent Movement was Joris-Karl Huysmans’ novel À rebours, first published in 1884. This was the text which identified a literary tradition of Decadent poetry and prose extending from the work of Baudelaire, and provided that tradition with its wider context. It became the Bible of would-be Decadents of all kinds: those who aspired to artistic Decadence, those who aspired to a Decadent lifestyle, and those who aspired to both. À rebours laid out the Decadent doctrine, and instructed the acolytes of the new creed as to what to read, how to appreciate what they read, and how to pass cynical judgment on the affairs of a world which they were fully entitled to despise. It sent people forth on quests for new experience, and offered a philosophical licence to all manner of self-indulgent fetishisms.

Although À rebours was not translated into English until 1922 its notoriety in England was assured by the famous passage in Oscar Wilde’s novel The Portrait of Dorian Gray(1891), which describes its profound effect upon the imagination of the young anti-hero. The book is not named in the passage, but its identity is unmistakable; were anyone in doubt, all possible confusion was cleared away when Wilde was asked to identify it at his trial and did so. The book's potential audience in England was necessarily more select than its potential audience in France, but even those who could not read it for themselves could hear the details of its creed from others, given extra glamour by its esotericism. If we are to understand the philosophy which supported the Decadent Movements in France and England, therefore, we must begin with À rebours.

À rebours is a strange and unique book, more a meditation than a novel. It is an elaborate and intense character-study of a minor nobleman named Jean Des Esseintes, and it provides a detailed account of an experiment in lifestyle which he undertakes in the hope of discovering the perfect modus vivendi. Des Esseintes is to some extent a caricature - some of his tastes and mannerisms are borrowed, tongue-in-cheek, from the most celebrated of contemporary Parisian men-about-town, Comte Robert de Montesquiou - but he is also to some extent a fantastic self-projection of the author. It should not be forgotten that he is in part a comic figure, but it should not be forgotten either that behind the mask of absurd affectation there is an unmistakable depth of feeling.

Des Esseintes had always been infatuated with flowers, but this passion—which, during his sojourn at Jutigny, had extended to all flowers, no matter what species or genus they belonged to—had eventually been purified and narrowly focused on a single kind. For a long time now he had despised the commonplace plants which bloomed in Parisian markets in moistened pots, beneath green awnings or red parasols. While devoting time to the refinement of his literary tastes and his aesthetic preferences, preserving his affection for no works save those finely sifted and distilled by subtle and tormented minds, and while simultaneously hardening his distaste for widely-held notions, his love of flowers had also been purged of its dregs and superfluities; it had, as it were, been clarified and rectified. He was fond of comparing the stock of a horticulturalist to a microcosm in which all the social classes were represented. There was wretched floral riff-raff — mere weeds like the wallflowers, whose true milieu was the window-box, their roots crammed into milk-cans or old earthenware pots. There were also pretentious, conventional and stupid flowers, like roses, whose place was to be bedded down in porcelain pots painted by young ladies. Lastly, there were flowers of noble descent such as orchids, charming and delicate, thrilling and sensitive—exotic flowers which, in Paris, must be exiled to the warmth of glass palaces. These were the princesses of the vegetable realm, living apart, having nothing at all in common with the plants of the street or the bourgeois blooms. Although Des Esseintes could not help experiencing a certain interest, born of pity, in the flowers of the lowest class as they wilted in the exhalations of the sewers and sinks of the slums, he loathed utterly the bouquets which matched the cream and gilt of the new houses; the delight of his eyes was entirely reserved for the rare and distinguished plants brought from afar, maintained by careful artistry in tropical conditions faked by the controlled breath of stoves. Once his definitive choice had settled on hothouse flowers, it had to be further modified by the influence of his general philosophy of life and the specific conclusions at which he had now arrived; previously, in Paris, his natural penchant for the artificial had led him to forsake the real flower for its image, faithfully reproduced by virtue of the miracles of rubber and wire, cotton and taffeta, paper and velvet. Consequently, he possessed a marvellous collection of tropical plants fashioned by the hands of true artists, who had followed Nature step by step while creating anew. They had taken each bloom from the time of its birth to the fullness of its maturity, even simulating its withering, making note of its subtlest nuances, the most transient aspects of its wakefulness or repose. They had observed the tenor of its petals when ruffled by the wind or crumpled by the rain, sprinkling its unfolding corolla with drops of dew or glue, presenting it in full flower when the branches are bowed by the weight of sap, and with a withered stem and shrivelled head to reflect the time of discarded petals and falling leaves. This admirable art-work had long held him in thrall, but now he dreamed of another kind of floral display; having had his fill of artificial flowers aping real ones he wanted natural flowers which would imitate fakes. He brought his intelligence to bear on this problem; he did not have to search for long or go very far, because his house was situated in the very heart of the horticulturalists’ territory. He took himself off directly to visit the greenhouses of the Avenue de Chatillon and the vale of Aunay, returning exhausted and broke, wonderstruck by the vegetal extravagance which he had witnessed, unable to think of anything except the species which he had acquired and the haunting memories of bizarre and magnificent blossoms. Two days later, the carriers arrived. With his list in his hand Des Esseintes went forth to confirm his purchases, one by one.