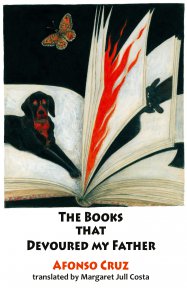 ‘Vivaldo! Vivaldo! Vivaldo! Vivaldo!’ yelled the head of department, but to your father, that voice was just a kind of background noise, disappearing round a corner.’
This was how my grandmother would begin telling me the story of Vivaldo Bonfim, my father. He worked in the 7th division of the tax office, and found himself marooned in a dull, tedious, boring, monotonous world full of bureaucratic paperwork and other documents, all made from the wood of trees, and yet a world bereft of literature. At this fateful moment, my mother was pregnant with me, and I was swimming around in her womb, like clothes gyrating in a washing machine. My father thought only about books (books and more books!), but life was not of the same opinion: his life had its mind on other things, and he had to work. Life often shows no consideration at all for the things we like. And yet my father would take books (books and more books!) to work with him and, whenever he could, he would read in secret. Not a very good idea really, but the impulse was irresistible. My father loved literature above all else. He would hide a book beneath such things as tax statements, declarations of a change to personal details, and other equally illustrious documents, and would then read discreetly, meanwhile pretending to be working. This was not a very wise thing to do, but my father thought only of books. Or so my grandmother would tell me, her brow furrowed in thought.
I never knew my father. By the time I was born, he was no longer in this world.
Chapter 2
Stairs and staircases

What is a euphemism? It’s the less wounding expression we use to avoid saying something that might prove hurtful to someone. For example, rather than saying that my father died of a heart attack, I can say he is no longer in this world. Then again, while ‘he’s no longer in this world’ might seem like a euphemism for ‘died’, it isn’t. As you’ll see, it’s the literal truth, and not figurative at all.
One afternoon, an afternoon like so many others, my father was reading a book he had hidden away under a tax form so that his boss wouldn’t notice that he wasn’t working. And that afternoon, he became so immersed in, so focussed on, his reading that he actually entered the book. He became lost in it. When the department head went over to my father’s desk, my father was no longer there. On the desk lay a few tax statements and a copy of The Island of Dr Moreau open at the last few pages. Júlio (for that was the name of my father’s boss) called out to him: Vivaldo! Vivaldo!, but my father was gone. He had become part of literature, and was actually living that novel.
My grandmother explained that this really can happen if we concentrate very hard on what we’re reading. We can actually enter a book, as my father did. It’s like leaning over a balcony, although far less dangerous, even though it does involve falling several storeys, because a book can have many storeys. I found out from my grandmother, for example, that a man called Origen once said that there was always a first, superficial reading of a book and then other deeper, more allegorical ones. I won’t say any more about that here; it’s enough to know that a good book has more than one skin, and should be a building with several storeys. Just having a ground floor isn’t enough for a book. It’s fine for civil engineering, and comfortable for anyone who dislikes stairs, and useful for those who can’t cope with stairs at all, but literature needs storeys to be piled one on top of the other. Stairs and staircases, with words above and words below.