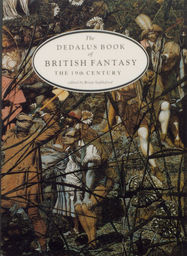 The Dedalus Book of British Fantasy : The 19th Century

Beginning in 1804 with Nathan Drake's 'Henry Fitzowen', The Dedalus Book of British Fantasy traces the development of the genre through the stories and poems of Coleridge, Keats, Dickens, Disraeli, William Morris, Christina Rossetti, Tennyson and Vernon Lee, until the end of the century and Richard Garnett's 'Alexander the Ratcatcher'.