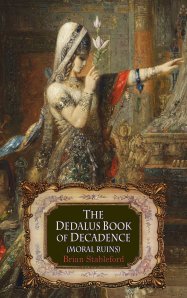 Every aspect of The Dedalus Book of Decadence(Moral Ruins) received praise when it was first published in 1990, from its cover(The Times Higher Education Supplement), the introduction(The Independent), the choice of stories(City Limits) and the whole book(Time Out). It was a critical and commercial success, which featured in the Alternative Bestsellers list and by popular demand we have brought it back into print. It is the first part of Brian Stableford’s seminal two-volume study of the decadent movement.

"The Dedalus Book of Decadence looks south to sample the essence of fine French decadent writing. It succeeds in delivering a range of writers either searching vigorously for the thrill of a healthy crime or lamenting their impuissance from a sickly stupor."
Andrew St George in The Independent

Rights:
Compilation and introduction and translations where specified.