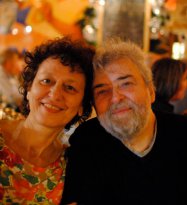 Julia Sherwood was born and grew up in Bratislava, then Czechoslovakia. After emigrating to Germany in 1978 she studied English and Slavonic languages and literature at universities in Cologne, London and Munich, before settling in the UK, where she spent more than twenty years working for Amnesty International. She travelled widely in Eastern and Central Europe and the former USSR following the changes in 1989, deepening her knowledge of the languages and literatures of the region. She works with her husband as a freelance translator from Slovakian to English.