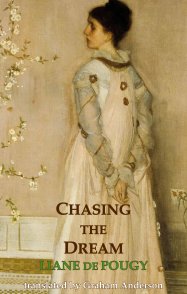 'Pougy's debut novel, Chasing the Dream was published in 1898. Admirably pragmatic, Anderson describes it as " a kind of half-time report on her career to date". It opens with the heroine Josiane horizontal on a chaise longue in her negligee. Suddenly a stranger arrives - her old lover, Jean, who declares his undying love, then politely enquires what she has been up to. It is a long story, so Josiane proposes a correspondence in which she will relate the details. The letters that follow chart Josiane's ascent through the Parisian demimonde via assorted aristocrats, politicians and businessmen.'

Even in its final, very melodramatic turn Chasing the Dream remains an agreeably light novel. Josiane is an unusual romantic heroine. De Pougy doesn't wallow in any would-be sordidness of her many affairs, or sensationalize them; it's all very casual and natural, with Josiane finding the details hardly worth a mention. Her romantic hopes for love, and the difficulties she has even coming close to it, give the story some drive -- the novel is, ultimately, a straightforward romantic-quest-tale -- but even though her longing is presented somewhat over the top, it doesn't come across as too absurd or ridiculous (as such longing-for-love easily can in a romance novel). It helps that Josiane isn't seeking approval -- she doesn't need to be loved, as so many romantic heroines desperately do, but rather wants to find what satisfies her -- as does the fact that Josiane doesn't let her idealized-love-wish get in the way of her having a good time along the way...

Chasing the Dream is a light piece of entertainment, but it is cleverly done. Managing to indulge in the most typical romance-tropes but also upending many of the expectations one has from this kind of story, de Pougy shows a fine touch in this, her first novel. If many of the pieces are familiar, de Pougy nevertheless crafts a work that is more than just a run-of-the-mill period-curiosity.

Chasing the Dream is part of the Dedalus European Classics series, and it’s an amazing novel.'