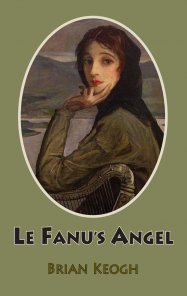 'Keogh does an excellent job of both channelling/mocking the Irish Gothic novel tradition, telling a good story of good (relatively) versus evil, showing the corruption and dark side of modern-day Ireland and keeping us guessing to the end where it is all going to end up.

The key issue for Kieran is death. He has been exposed to it in childhood and nearly experiences it himself later and, indeed, is never really sure if he is dead and imagining he is alive or really alive. He is a witness to a few deaths in this book and the cause of a few. He frequently confronts death or the threat of death in his otherworld visits (he calls them deathmares). In short death hangs over this book but, to a certain degree, Keogh is mocking our obsession with death. This book is definitely a worthy addition to the Irish Gothic tradition.'

'Kieran Sheridan Le Fanu, Dublin advertising executive and namesake of the famous author, wakes from a coma following a serious car accident, but even concussion can't explain what's going on around him. He's attacked by an intruder no one else sees. Events of a full day seem to be compressed into the space of two hours. A patient who was never there dies in his room, and he gains the protection of a beautiful guardian angel. Kieran begins to suspect that he's actually died, and what he is experiencing is some limbo world between life and death. Keogh's debut novel is a gripping and audaciously effective supernatural thriller, which pits his protagonist against savage spectral entities from a realm of the dead in conflicts which toughen him up for the equally crucial battles in the boardroom of his advertising agency. Through all the mayhem and gore, Keogh's tongue is never far from his cheek.'

Alaistair Mabbott in The Herald

' A thought provoking novel about death and a possible afterlife with Gothic overtones.'

' In Le Fanu’s Angel Brian Keogh has created an engaging story that blurs past and present, reality and fantasy in following Kieran’s attempts to make sense of his near-fatal accident and recovery and find the mysterious Aoife who may be his angel.'

'Most importantly, Keogh tells a good story - both at the level of the individual episodes as well as the larger stories - and tells them well, making for a thoroughly engaging novel and enjoyable read.'

Le Fanu’s Angel is the story of an ordinary man who finds himself in the extraordinary world with guardian angels, reincarnation and regression, while striving to become the CEO of an ad agency.

It’s an enticing debut from author Brian Keogh, with a strong protagonist. Kieran René Sheridan Le Fanu is an early-30s advertising agency director with a humdrum life until a ghastly car accident, of which he is the sole survivor.

He wakes up with no memory of the events and the realisation that his friend, the CEO of his firm, who was driving the car, is dead.

He meets Aoife, an apparition who appears out of nowhere at his hospital bed, and becomes obsessed. He starts to see her everywhere and this infatuation topples the first domino in the series of mysterious events. Slowly, Kieran grows to suspect he might actually be dead and what he is perceiving might not be reality.

Kieran recovers astonishingly fast, while learning that he might be experiencing a form of Cotard’s syndrome which leads to a delirious state of mind.

He returns to work to find himself the acting CEO, to the displeasure of the founders. A few bizarre mishaps – a road-rage incident, a mugging and an attempt to murder – are averted by strokes of luck, as if a guardian angel is protecting him.

Realising that he has things going for him, Kieran, now a changed man, pursues the angel we earlier met as Aoife, while trying to unearth a scam at the agency.

Keogh tackles several themes in the book, from the pathological to the paranormal. The protagonist’s attempts to deal with death show up as necrophobia and Cotard’s syndrome. These are seemingly borrowed from the author’s own experience after surgery. This theme is further extended to reincarnation and past-life regression which turn out to be major plot points.

The author narrates mostly in first person from the perspective of Kieran, while switching to third person in chapters where the reader is an observer. This switch seems out of place at times, especially given the unreliable nature of the narrator’s reality. But not enough to affect the reading experience.

The characters are distinctive but lack a personal journey, except for the protagonist. There are a crowd of supporting characters like the helpful psychologist, a mystical nonagenarian, Kieran’s uncle Jasper, and his work rivals, the Brennans.

The author also engages in a sub-plot within Kieran’s agency, when the protagonist discovers a scam and sets off a string of events endangering himself. The corporate politics, while interesting and aids world building, seems a bit stretched out. Minor details somehow don’t tie up with the overall theme and the ambition of the book.

The author sets up situations and chapter transitions rather well, but falls into the familiar trap of describing the only substantial woman character with cliches like “tall and slender” and “a face devoid of make-up since her flawless skin required none”. There are a few sequences which are graphic and gory, as when a ghoulish monster hunts down Kieran and a minor character is mauled to death. The author does justice to these scenes, without going overboard.

The story takes you all over Dublin and beyond. From the protagonist’s posh Glenageary home to Baggot Street along the Grand Canal. The action ranges from Portobello to Dalkey, with the end playing out in an occultist’s office in Glendalough.

The author, who has written about how comfortable he feels with issues such as the possible existence of an afterlife, reincarnation, the illusion of reality and parallel worlds, has sprinkled transcendental elements liberally throughout the book. There are instances where the characters have little to no scepticism regarding such events. A pivotal character survives a near-fatal fall but accepts the perpetrator to be supernatural.

However, the disbelief of the reader is handled convincingly. The story wraps up in a fantastic setting with a twist that breaks the suspense of who the angel was all along.