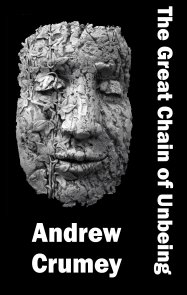 Crumey manages to make his intricacy marvellous. As carefully constructed as a Book of Kells marginal design, this novel avoids the chill that might have attached to such a virtuosic technical exercise, in part because it is often very funny and because it has real heart. The Great Chain of Unbeing is unboring, unusual and quite brilliant.

Adam Roberts in The Literary Review

This is Crumey's first short story collection, after seven novels. It is a delightful introduction to his singularly riddling work - and in Crumeyesque style it is an intermezzo that doubles as an overture. For those, like I, who have read all his work it is a joy to see familiar themes and beats and characters in an askance way. For a reader who has not experienced his work, it is a self-contained introduction to the oeuvre and his mythos. It is in some ways a novel masquerading as a short story collection...
Although there is both wit and insight in this collection, there is an undertow of melancholy. It circles around human failings even in alien circumstances. The longest piece, 'The Assumption' has the queasy ennui of Thomas Mann's Death In Venice. There is a sense of desperate repetition: the same tribulations, the same deceits, the same prevarications. If, as in Crumey's horrific thought experiments, everything happens again and again and again, then it is at least a consolation that I shall read this again and again and again.

Stuart Kelly in The Scotsman

ANDREW Crumey has carved out a unique place for himself amongst Scottish novelists. His novels, beginning with Music, in a Foreign Language all the way back in 1994, and including Mobius Dick, D’Alembert’s Principle and Sputnik Caledonia, have ventured into exotic, esoteric realms where quantum physics and philosophy merge into one another. In a Crumey book, one might encounter impossible machines, alternate realities or historical figures from the 18th century wrestling with metaphysical conundrums, if not all three at once. And still, for all his inventiveness, originality and proven track record, he remains largely unknown.
The Great Chain of Unbeing, then, is a fine opportunity for new readers to get on board and see the kind of thing he does. It’s comprised of 10 very loosely connected short stories approached in a variety of ways. One of the surprises the book has in store is just how well Crumey writes straight, naturalistic fiction. “Tribology”, about a professor attending a conference in Russia and having an intense conversation with his cabbie on the way to the hotel, is a gripping and ultimately satisfying short story.
And “The Assumption”, by far the longest story here, is the most conventional and the one that elicits the greatest emotional investment in its main character, a troubled young woman who meets an old hippy espousing Zen philosophies just as her relationship with her father and stepmother has reached its lowest ebb.
On the opposite end of the scale, “Between the Tones”, featuring a pianist who goes through life like a paranoid hitman, and which also pairs Theodor Adorno up with the father of FM radio Edwin H. Armstrong, is Crumey at his purest: throwing ideas together to see how they interact, and no doubt being surprised himself at the results. Those yet to discover
Crumey shouldn’t come away with the impression that his oeuvre is po-faced, highbrow experimentalism. His stories are animated by a spirit of mischievous curiosity, nowhere more so than “Fragments of Sand”, wherein a postman elevates his job to the status of art, an insect lectures students on nature’s more extreme mating habits and a subterranean Scotland can’t get its currency taken seriously by surface-dwellers.
There are numerous links between the stories, but they’re subtle and not always noticeable at first glance. But there are also pointers to the future. Self-taught pianist Crumey’s next book is going to be about Beethoven, who gets several mentions here, plus a cameo in a vivid, absorbing vignette about 10-year-old prodigy Carl Czerny nervously auditioning for the composer. It whets the appetite for the forthcoming novel, which might possibly be the culmination of all Crumey’s done to date. For the moment, though, we have The Great Chain of Unbeing, a book bursting with fertile fusions of ideas. Surely this Scottish Borges can’t be overlooked for much longer.'

In his previous eight novels Crumey has constructed a strange niche for himself from his considerations of music, parallel worlds, imagined universes, the rendering of scientific concepts thought to be abstruse into accessible fictional form, all peopled with credible characters experiencing real human dilemmas. He is not beyond literary playfulness. Here we start with ‘The Unbeginning’, finish with ‘The Unending’ and ‘The Introduction’ comes as part three.

His latest novel is unconventional even in Crumey's terms. It’s presented as a series of tales, which at first sight appear to have only the most tenuous of links between them yet on closer examination yield foreshadowings and echoes, subtle resonances both with themselves and the rest of his oeuvre.We have a scene from the life of a man genetically blind due to his father‘s exposure to H-bomb tests, a tale of mistaken identity on the international conference scene, an imagined interview, the thoughts of a lecturer undergoing a CT scan, how silk worms came to Europe, a man suspecting his wife of an affair, a fragment from a life of Beethoven, a young woman visiting her father on a Greek island after an abortion, the consciousness of a concert pianist who comes on like a hitman, the spying activities around the military secret that was early FM radio, a postman’s reminiscences, a lecture given by an insect, the story of The Burrows(a vast tunnelling project the length and breadth of Scotland) and the underground habitat which results, the invention of the word-camera which captures a scene and renders it in text, a woman bumping into someone she thought was dead, a philosophical discussion of a Moslowski-Carlson machine to replicate Earth light years away, extracts from a truly awful SF novel inhabiting just that universe, a metaphor about the dangers of seeking fire.
They’re all beautifully written, pitch perfect to the milieus portrayed but also interspersed with a sly humour. ‘Bradley’s a real philosopher, incidentally, by which I mean a dead one’, and in The Burrows section ‘Some international medical authorities insisted that being starved of sunlight would cause long-term health problems but the Scots had been managing like that for centuries and it hadn’t done them any harm’, with ice-cream having a surprisingly prominent presence.

The text comments on itself – ‘A conventional novel or story collection is a sequence of parts in some predetermined order. We could of course read them any way we like’ - and provides ‘layers of fiction’. Characters note variously a tendency to inconsistency, that imitation is the most fundamental human impulse: ‘We describe everything in terms of its similarity or difference compared to something else.’ That things aren’t what they seem or are described as being different to what they are. There are thoughts on a ‘past that wasn’t there’, ‘spurious influences’, ‘the night she didn’t have, with him instead of Matt. There is only now, she thought. Nothing else has any existence.’ The five-second thrill of a life that never happened. The territory between being and non-being. One character says ‘What neither of us can imagine is a universe without space and time’, yet elsewhere we have ‘Time is an appearance not a reality’.

Despite ‘the interconnections by which the world is made a coherent whole’, even the most straightforward mainstream passages are saturated with subtle indeterminacies which it would be easy to overlook. Statements like ‘You concentrate on that object … visualise it as clearly as you can. Until it becomes no longer itself”, or ‘Alfredo Galli wanted to create a matrix of compositional elements through which numerous paths could be conceived, each a possible book with its own multiplicity of readings’, and ‘History is an infinite superposition’ but ‘The universe is a circle … A great chain of living and dying, giving and taking. Every moment is a link’. “There is only one not many. No Difference, only Alike.’ Yet ‘all literary style is really a kind of selection, a form of negation’ and ‘any path through the matrix of narrative possibilities should be a story not only scandalously disjointed but also inherently inconsistent: an appearance betraying its own unreality.’
What we have here is perhaps a literary expression of sonata form - ‘in the development the tunes get mixed up’ - but with something to be discovered between the tones but nevertheless totally accomplished.

‘When is a book of short stories not a book of short stories? When it is written by Andrew Crumey. As those who have read his previous work, (which includes Sputnik Caledonia, Pfitz, and The Secret Knowledge), will know he is a writer who appears to derive great delight in the undertaking of writing and the possibilities it offers, and also in playing with the expectations of readers. He unashamedly embraces ideas and examines them with a forensic, yet playful, eye. This has never been shown to better effect than with his latest book The Great Chain Of Unbeing – a collection of stories which are bound intrinsically, yet almost imperceptibly, by interrelated situations and characters. Just who, how, why, where and when – these are all for you to uncover and unpick…
If you haven’t read his work before then I think The Great Chain Of Unbeing an ideal place to start. All his books can be read on different levels, but that applies to this one more than most while still giving you the full Crumey experience. Put simply, he makes you think. More than that he challenges you to think, and that’s what a great writer should do. We all need a challenge, otherwise what’s the point?’

It's clever stuff, ingenious, occasionally baffling and deeply satisfying. This book is a game, and by the end I got the rules.'

Alison Bell in The Scottish Review of Books.