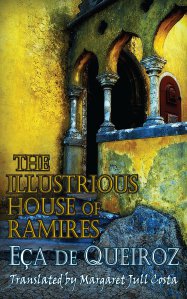 Slyly funny and richly detailed, this reissue of Queiroz's long out-of-print book makes for a delicious introduction to Portugal's greatest novelist. First published in 1900, the year of Queiroz's death, it portrays Goncalo Mendes Ramires, the latest in an aristocratic family that predates even the kings of Portugal. In the isolation of the gloomy ancient tower of Santa Ireneia, Goncalo rehearses the feats of derring-do of an uninterrupted line of ancestors whose most recent contribution is himself, 'a graduate who had failed his third year examinations at university.'' Hoping to win some small scholarly reputation and thus secure a political future in the capital, Goncalo sets out to portray (a la Walter Scott)), the adventures of one such ancestor. Installments recording the haughty courage and cruelty of his medieval forefather, Tructesindo Ramires, contrast with Goncalo's rather banausic existence, his cowardice, his small acts of noblesse oblige and his questionable apotheosis. Queiroz's luxurious prose lends itself well to both the subtle irony of his morality play and the beauty of a decrepit Portuguese estate with its autumn sun, wilting flowers, faded portraits and other reminders of a bloody and powerful past.

Late, reflective work by de Queiroz (1845-1900), widely considered Portugal's greatest novelist.
Writing at the height of Portugal's overseas empire, de Queiroz traces the life of a man who is a touch too proud of his ancestors, so much so that he reminds an emissary of the king himself, 'My ancestors had a house in Treixedo long before there were any kings of Portugal, long before there was a Portugal.' By the end of the book, we are given to understand that Gonçalo Mendes Ramires, who quixotically likes to call himself the Nobleman of the Tower, is himself a metonym for the Portuguese nation in all its bumbling glory: 'His generosity, his thoughtlessness, his chaotic business dealings, his truly honorable feelings, his scruples, which can seem almost childish' - and that's to say nothing of a certain shlemielishness that doesn't quite hold up well by comparison to the illustrious ancestors he reminds himself of daily, enshrined in the portraits and books with which Gonçalo surrounds himself in his teetering family home. He's a bit more self-aware than Cervantes' great hero, but we are assured that Gonçalo, however much he might like to have fought along his ancestor Tructesindo, would not have fit in well. Still, Gonçalo manages to make something of himself as the story spins out, having gone from callous reactionary to somewhat technocratic African colonialist and having finally finished the long book about his noble house that occupies much of his waking time. This is very much a 19th-century novel, unhurried and richly observed; while it can be a little fusty, de Queiroz, who has been likened to Flaubert, turns in elegantly poetic prose: 'When I was fighting the Moors, a physician once told me that a woman is like a soothing, scented breeze, but one that leaves everything tangled and confused.'
Fans of Vargas Llosa and Saramago will find a kindred spirit in these pages.

Jose Maria de Eça de Queiroz, where have you been all my life? Dead, obviously - the man died in 1900 at the age of fifty-five - but his novels are acknowledged as classics in his native Portugal, and by well-educated people the world over. As readers of the Daily may remember, I tore through my first Eça book a few months ago. And now Margaret Jull Costa has translated The Illustrious House of Ramires, his last novel, about a provincial aristocrat - a dreamer and amateur historian - who tries to write a novella based on the exploits of his Crusader ancestors. Comedy and mayhem ensue. As in The Crime of Father Amaro, Eça's tone shifts from light to dark, from tender irony to horror, then back again, in a single page, almost in a sentence, as Ramires-like a fin de siècle, Portuguese Quixote — tries to re-create the chivalry of his forbears. The plot is full of surprises, but even when our hero is just sitting at his desk, dreaming up deeds of valor, Eça takes us inside the fantasy, until we start to wonder whether Ramires has crossed the fine line between idiocy and genius. It's rare to find such a thrilling portrait of the writer at work.

Lorin Stein in The Paris Review

Here is the first new translation in half a century of this comedic masterpiece by veteran translator Costa of a Portuguese author whom Emile Zola considered more talented realist than Flaubert. First published in 1900, the year of Queiroz's death, it chronicles the life of the charmingly ineffectual Goncalo Ramires, Portugal's most authentic nobleman, whose lineage predates his country. Aspiring to be a Portuguese Sir Walter Scott, he believes that by novelising in two volumes the exploits of his medieval ancestors, he can gain entree to the world of politics. The valour of his fiercest ancestor, Tructesindo Ramires, only serves to underline Goncalo's lacklustre existence as he typically spends his days lounging on his damask sofa, peering languidly at the Chinese lacquer clock in the corridor of his rundown family estate. In spite of this, the author conjures a remarkable sympathy for the hapless fellow.
Verdict. Recommended for fans of 19-th century naturalism and realism and tales of aristocratic decadence.

Jack Shreve in the Library Journal

The Proust of Portugal...The final book Eça wrote, The Illustrious House of Ramires, has just come out in a much-needed new translation by Jull Costa. As with his rambunctious fable The Relic (1887), the novel is structured around a bold narrative conceit. As the story proceeds, Gonçalo not only manages to convince himself that he is on a path that would impress his storied forebears, but, echoing Don Quixote, more or less dreams his way into their twelfth-century world—the novel includes colorful excerpts of his literary effort, a pastiche of Herculano, it turns out, full of chain-mail and dismounts from horses, and humorous cries of things like “Stand ready, crossbowmen, stand ready!” Ramires was well received, and even satisfied Machado de Assis, who called it 'a new blossoming for our Eça.'

James Guida in The New York Review of Books

The Illustrious House of Ramires, presented here in a sparkling new translation by Margaret Jull Costa, is the favourite novel of many Eça de Queiroz aficionados. This late masterpiece, wickedly funny and yet profoundly tender, centres on Goncalo Ramires, heir to a family so aristocratic that it predates even the kings of Portugal. Gonçalo - charming but disastrously effete, idealistic but hopelessly weak — muddles through his pampered life, burdened by a grand ambition. He is determined to write a great historical novel based on the heroic deeds of his fierce medieval ancestors. But 'the record of their valour,' as The Spectator remarked, 'is ironically counterpointed by his own chicanery. A combination of Don Quixote and Walter Mitty, Ramires is continually humiliated but at the same time kindhearted. Ironic comedy is the keynote of the novel. Eça de Queiroz has justly been compared with Flaubert and Stendhal.

When the protagonist is a 'combination of Don Quixote and Walter Mitty,' you can be sure that this late masterpiece of one of Portugal's greatest writers will be extremely entertaining. As the heir to a hyper-aristocratic family, Gonçalo Ramires obsesses about writing a great historical novel based on the deeds of his medieval ancestors. Ramires, though, is more idealistic and effete than practical and determined, so this grand ambition ultimately becomes a burden. With a new translation by the eminent Margaret Jull Costa, The Illustrious House of Ramires should be at the top of your TBR pile.

Anti-hero protagonist, Gonçalo Mendas Ramires, also referred to throughout as “The Nobleman of the Tower,” holds his familial lineage, talents, and self-worth, in the highest regards. His lack of self-awareness and assurance of his own nobility, combined with his natural inability to accomplish almost nothing, provide for a delectable read. Costa’s re-translation highlights her translating powers to both preserve and portray a world that has been left behind by the end of the nineteenth century, whilst highlighting a kind of humor and irony that some might claim to be the definite marker of the cynical twenty-first century.

' If Eca confronted his compatriots with deadly serious farce, the challenge this brilliant, witty, linguistically innovative writer poses to a translator is no less considerable. Margaret Jul Costa is an old hand at this, having now translated all ten of the author's novels for Dedalus in a mammoth project that now ends with this one. Here again she rises admirably to the task. Her text flows beautifully, and perfectly captures Eca's sardonic touch.'

M.M.Lisboa in The Times Literary Supplement

'The Illustrious House of Ramires, Eça de Queiróz’ final novel which was published posthumously in 1900 and now appears in Margaret Jull Costa’s lively translation, with its dramatic thrust and intellectual fizz....As we bid farewell to Gonçalo at the novel’s end—and I do confess to an intense sadness at parting—we become aware that what we have read is not just a portrait of a man and the stories he tells about himself, but a stark rendering of a society and the narratives it recites about itself. With The Illustrious House of Ramires, Eça de Queiróz gave Portugal a new voice with which to inscribe itself on the world.'

Famed for his realist depictions of 19th-century life (he died in 1900), his satirical account of Portugal’s decadence – The Illustrious House of Ramires – is both hilarious and savage at the same time.