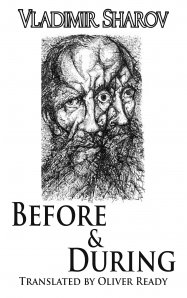 Here is a novel with no parallel in contemporary literature, a novel where fantasy does constant battle with the insane intention of embracing all of history with a single story.

Sharov has assimilated, perhaps more than any of his contemporaries, the artistic and philosophical legacy of both the nineteenth and twentieth centuries of Russian literature. Like Dostoevsky, he is excessive not in order to deny, misrepresent, or flee reality but, rather, to capture it more accurately.

Some of the book’s elements – madness, fantasy, biblical references – are reminiscent of The Master and Margarita, but the analogy with Bulgakov does not run very deep. Sharov’s real precursor is Andrey Platonov, who was influenced by Fyodorov’s teachings and drew strong parallels between Soviet ideology and religion. If Russian history is indeed a commentary to the Bible, then Before and During is an audacious attempt to shine a mystical light on it, an unusual take on the 20th century’s apocalypse that leaves the reader to look for their own explications.

Anna Aslanyan in The Independent

'Before and During is not a historical novel. Rather, it is closer to one of Mikhail Bakhtin's carnivalesque venues, a Menippean satire in which historical reality, in all its irreversible awfulness, is for a moment scrambled, eroticized ... and illuminated by hilarious monologues of the dead... There are wonderful stretches: an exegesis of Tolstoy's failure to achieve the good in his own family;... an astonishing olfactory history of the First World War and Revolution through Scriabin's music. How Sharov resolves the rejection of death is especially good... With this elegant and dry-eyed translation by Oliver Ready, anglophone audiences can finally weigh in.

Sharov has worked all the pain, complexity and forgetfulness of Russia's history into a dark and erudite fairy tale, that
confronts the destruction of the Soviet era from a largely introspective point of view.

THE leading words of the blurb of this novel "set in a psychiatric clinic in Moscow in the long decades of late-Soviet stagnation" led me to expect that it would be an exposé of the shameful abuse of this aspect of medicine (used as torture) in the Soviet Union. It turned out to be far different. It is a work of pure fiction, recounting the extended ravings of inmates who were deeply disturbed.
Since the late Alexander Solzhenitsyn, no Russian novels have penetrated Western consciousness, and we have had to wait a long time for this one: Vladimir Sharov is 62, and this was first published in Moscow in 1993. Superbly translated by Oliver Ready it is worth the wait, and is the only one of his eight novels to have appeared in English. We should know more of him.
The “ravings” are disturbing to us, too. They inhabit the sort of realm first explored by Nikolai Gogol, the 19th-century Russian-Ukrainian novelist and playwright best known for The Inspector General. Sharov’s enclosed world is a phantasmagoria with a foot so firmly planted in reality as to upset many – Russians as well as us, as evidenced by the scandal created when the famous literary journal Novy Mir (New World) originally published it.
It upset many because of the satirical basis of the book, reflecting the hold that the ghosts of Lenin and Stalin still had (and have?) on the Russian mind. Inmates recount their imaginings to the author, who reports them objectively and in serious literary language. The nub of the book (not revealed in the blurb, but I must do so) is that Mme de Stael admired the French Revolution and begot the Russian one. She did, in fact, visit St Petersburg in 1817 and obtained a Russian passport. Endued [sic] with immortality (she died in 1817, aged 51), she lived on to inspire Lenin and – wait for it! – her progeny eventually produced Stalin (Stael – Stal –Stalin, whose real name was Djugashvili).
There is much more, involving the composer Scriabin, and Lenin; but to unravel it you must read this book, which, incidentally, to me, has a controversial Christian underlay.

Indeed this is not the usual historical or even 'alternative-historical' novel. This is one of the most fascinating books in post-Soviet literature; it is a pity that it appears in English almost twenty years after its first publication. Here we see the cliché 'Time will tell' coming true: even twenty years after its publication and translated into English, Sharov's Before & During reads as if it were completed yesterday. It is a rare novel that can stand such a harsh test of time and space.

Mark Leiderman in The Russian Review

'Translation should not strive for perfection, but for excellence. Perfection is impossible, whereas excellence is only nearly impossible. And excellence is what Oliver Ready achieves in his rendering of Before and During by Vladimir Sharov. He captures the clear voice and confused mentality of the narrator who is able to love both Christ and Lenin, who prays for the sinner Ivan the Terrible and who tries to unravel the legacy of the Bolsheviks.'

With its multilayered narrative -- stories within stories, at times reaching back more than a century -- and its very determined but obscurantist fanatics and semi-madmen, Before and During is far from straightforward fiction; summary, or even just attempts to describe some of what it is about (as above) can only give a very limited sense of what this novel is. It shimmers in shrouds of mysticism -- yet for all that it is remarkably lucid. There's a crispness to Sharov's writing (and Oliver Ready's translation) that cuts through what otherwise seems foggy, and even as the narrator fades in and out of his own story, Alyosha's account, and his recordings in his Memorial Book, remain firmly grounded and relatively clear. The mysticism can be confounding (as mysticism always seems to -- or is meant to ? -- be), but this is in part offset by Sharov repeatedly stunning with invention: conceptually this is an often brilliant novel.
Before and During is very much a novel from and of and about Russia, highly allusive and steeped in Russian history and literature. The real-life figures can serve as reassuring touchstones for foreign readers, but there's clearly (and/or unclearly) much more to it; nevertheless, even just superficially -- without closer familiarity with Orthodox and Bolshevik history and creeds, for example -- Before and During is rewarding, a rare work of fiction that is, on several levels (including literarily and philosophically), provocative as well as simply exhilarating. An impressive achievement.

M. A . Orthofer in The Complete Review

'Before and During remains a disorienting read. The novel invokes real historical events and people (Tolstoy, Madame de Stael, Saint John of Kronstadt, Alexander Scriabin and Stalin, among others), swirling them into a phantasmagoric alternative chronology. Stories germinate within other stories, unfolding in astonishing variations. The clarity and directness of Sharov's prose – wonderfully rendered by Oliver Ready – are disconcerting, almost hallucinatory. His writing is at times funny, at times so piercingly moving, so brimful of unassuaged sorrow, that it causes a double-take.'

Rachel Polonsky in The New York Review of Books

Before and During justifies Sharov’s place as one of contemporary Russia’s most significant literary voices, and Oliver Ready is most deserving as the winner of the 2015 Read Russia Prize for his remarkable English translation of it. The novel’s theme that a life is nothing more than others’ memories of it may feel bleak, but memories, as witness to our past, also offer hope: that humanity can avoid repeating history’s mistakes, that we can free ourselves from committing the same unpardonable crimes against our fellow man.

When I reviewed Sharov's The Rehearsals, I called it a most original novel. This novel is even more so. Once again, Sharov takes Russian history and subverts it. As in The Rehearsals is key to the story though, in both cases, he endeavours to give a Christian aspect to it. In particular, in both books, Sharov's vision, shown through some of the main characters, is a Christian Utopia on Earth and, particularly, in Russia. It may not be a view espoused by many but it is certainly an interesting idea.

Whatever your views on religion, you cannot fail to be impressed by Sharov’s undertaking. He has given us a radical view of Russian history, from the early nineteenth century to the present day. He has completely changed the historical facts about major historical figures: Stalin, Mme de Staël, Scriabin, Lenin, Fyodorov, not to mention a bit of Tolstoy and used the to make his point about a Christian Utopia. But this is not a simplistic view of the matter. He sees that it is complicated and he and his characters struggle with it. Reading it as a novel, and not as a religious and political tract, which, of course, you should, it is an outstanding work.

When you put down Vladimir Sharov's books you feel as if you have woken up from a strange but captivating dream. As in all dreams, you visit a reality that has been turned upside down. Oliver Ready's thoughtful translation of Before and During and The Rehearsals guides us through the Russian past which at times is comically absurd, at times dark and poignant - but always personal

'Vladimir Sharov, who won the Russian Booker and passed away in 2018, has been a big revelation for me this past year. His novel Before and During, published by Dedalus and translated by Oliver Ready, is narrative within narrative within narrative; it’s very stimulating in structure, voice, and in how it engages with memory, and Soviet and post-Soviet history. Finding a writer like this is what I live for, to be honest.'

David Peace in The Guardian