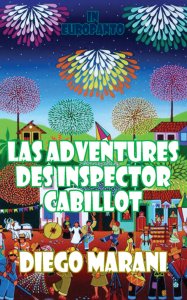 Marcus Berkmann in The Spectator

Marani's ability to see humour in his longing for a universal language has flowered in his creation of Europanto, a jovial, pan-European tongue which began in his office and spread to columns in Swiss and other newspapers, some of which have been collected in Las Adventures des Inspector Cabillot. The book does not need to be translated: Europanto is 'der jazz des linguas. Keine study necessite, just improviste,und tu shal siempre fluente esse in diese most amusante lingua.'Take a framework of English word order, varied with the occasional German inversion, and chuck in whatever vocabulary occurs to you from French, German, Italian and occasionally Latin... Pretending to anarchy but addicted to rules, Europanto is a paradoxical creation. In the comic mode of Las Adventures des inspector the contradictions jangle merrily.