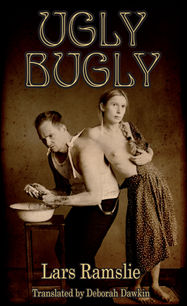 A dark, burlesque fable. Lars Ramslie’s fifth book has a raw, musical rhythm [...] As in his previous books we find in Uglybugly an intense preoccupation with the body, with bodily details, deformity, amputations, dysfunction and all possible variations of the human form. His stark, gritty descriptions are supported by the almost musical tension which has made Ramslie’s prose so unique since his debut novel.

Extravagant, gritty and rhythmic depiction of human dependency and degradation from an author who consistently uses the body as a starting point for his literary investigations […] The narrative voice’s alternate rawness, brutality and despair create a finely tuned, musical rhythm, in a novel which once more confirms this author’s reputation as a story-teller […] The language and his concentration on detail do not err for a moment, in the tale of these two ugly, outcasts.

Another literary triumph[ …] If we listen through our own laughter as we read this burlesque novel, we hear the delicate sound of a good, old fashioned and wise humanitarianism.

Lars Ramslie made his debut in 1997 with his novel Biopsy which won the Tarjei Vesaas Prize. Since then he has gone from strength to strength. […] In all, there are so many good things to say about Uglybugly, which is alternately grotesque and beautiful, funny and tragic, brutal and delicate, imaginative, riotous, wildly fantastical, linguistically inventive and at the same time precise and to the point […] In brief this is excellent literature.

Lars Ramslie describes his characters in language so sensual, so melodic, so personal, that the story not only captures the reader through his mind, but viscerally. We experience the pain and creeping of flesh together with the characters, and by probing the contemptible and primitive, Ramslie focuses on the things we sweep away into the subconscious.

Lars Ramslie is a prominent figure in the younger generation of Norwegian writers; his debut novel Biopsi won a national prize in 1997, and in 2004 the newspaper Morgenbladet named him as one of the country’s ten best writers under 35. The previous year had seen the publication of Fatso, subsequently filmed and translated into English, which tells the story of an overweight loner who devotes his time to pornography and voyeurism. Ramslie’s second book to appear in English is his follow-up to that controversial success. Uglybugly relates the fortunes of a pair of conjoined twins, from freak show attraction to untimely demise.

Superficially at least, the themes of the two books suggest a recurring concern with the body, though Uglybugly marks a departure from the urban realism of Ramslie’s previous work. The setting is a vaguely American “Bigtown”, the era is similarly unspecified but suggestive of early twentieth century. An air of fantasy and surreality is established from the outset: the conjoined twins Earl and Betty Merrik are of opposite sex, a medical impossibility, but one that immediately raises questions about the sort of physical, emotional and mental union they might experience.

The novel prologues with the first-person voice of Earl, telling us that he is dying. Like the original “Siamese twins”, Chang and Eng, one of the pair has expired and the other knows he must inevitably follow. What ensues is Earl’s account of their experiences from the time when they first arrived in Bigtown and met shady entrepreneur Mr King, a legless former wrestler, becoming enlisted as an attraction of his nightclub bordello.

Earl’s narration is lively, vigorous and fast-paced, emphasising the tawdry but compelling surfaces of the fantasy world rather than its possible emotional depths. Suspension of disbelief is essential, and the tone facilitates this. Even so, the reader may still be puzzled by some features of the narrative, foremost being sister Betty’s decidedly subsidiary role, despite being the narrator’s literal other half. For a long time she says nothing at all and is present only through reported speech; we are told that she is a garrulous religious obsessive but are not given direct evidence of it. The effect is that Betty seems like a constant companion tied to Earl as though with handcuffs, someone he happens to have found himself bound to, rather than a part of himself from birth.

Added to this is the role played by the arm they share, able to act without the conscious volition of either. This third character, “the thing”, has a mind of its own, steering the direction of the plot at certain points. So Earl is really part of a physical community localised in space but mentally quite distinct. What the reader gets is his partial version of how that community operates.

In that case Ramslie’s theme is not really the body at all, but the community. His novel dramatises a strict dualism between mind and flesh, Earl’s plight being alienation from his own physical presence. The relative lack of bodily description is in fact the novel’s most striking feature.

Another dualism is between Earl’s narrative voice, and the voice he gives himself as a character in the narrative. In Deborah Dawkin’s elegant and convincing translation Earl’s direct speech is rendered colloquially (‘ “Ain’t that a bit disgusting?” I asked’) whereas his own narration is formal (“Betty and I stood next to the display case, watching the whole performance in disbelief”). The effect of these registral shifts is that the character Earl depicts seems relatively uneducated while the depiction itself is literary. We eventually get an explanation for this: Earl’s story has been edited, filtered, rewritten; the original was his barely literate “memwars”. Again, though, there is a sense of a protagonist paradoxically marginalised within his own story.

If the body is only a metaphor for the social then this would perhaps place Uglybugly more firmly within the context of Ramslie’s earlier social realism. A product of Norway’s working class, sensitive to its excluded underclass, he has generated controversy by presenting an alternative to the picture we tend to have outside the country, of a largely homogenous, consensual and supremely tolerant society (where even the Anders Breivik case was seen as an illustration of Norwegian unity and humanity in opposition to evil). In Ramslie’s first book Biopsi, apparently based partly on personal experience, a son recalled the decline into heroin addiction, criminality and slow death of his once successful father. The title “biopsy” suggests physicality but what seems to concern Ramslie more is putting society under the microscope. In Uglybugly Earl is an outcast striving to maintain his dignity, even to the extent that we never once get a description of what it is like when either of the twins needs to go to the toilet. The novel is picaresque and comic, maintaining interest through imaginative leaps and visual set-pieces that include bizarre wrestling matches and a flea circus. All of this is highly entertaining. But it is from what is left unsaid that we discern the darker undercurrents of Ramslie’s energetic fantasy.

Andrew Crumey in The Warwick Review

Ultimately this is a beautiful book, and it is such because it takes things that are commonly regarded as ugly and grotesque, only to reinvent them and hold them up for our inspection in ways that show their true nature, the whole of the thing and not just the appearance. Earl and Betty, through no fault of their own, are ostracised from conventional society, but they find succour in the rooms of a brothel and behind the walls of the wrestler’s gym. They find people they can trust and friends they can rely on. They learn to eschew judgement as they themselves are not judged. These are the lessons of Uglybugly and we ignore them at our peril.