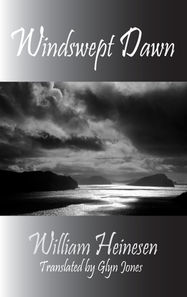 One of the greatest Scandinavian novelists of the twentieth century, Heinesen (1900-1991) was a native of the Faroe Islands, in the North Atlantic halfway between Norway and Iceland. The Faroes, or, more precisely, Faroese life, are subject and plot, respectively, of this, his 1934 first novel, appearing finally in its first English translation. It would be more documentary than novel were it not for the keen psychological penetration of every character on whom Heinesen focuses in particular chapters and scenes. Among the principals are a Lutheran minister slipping into paranoiac delusions; a dour, suspicious, shrewd village shopkeeper; a woman innkeeper and majordomo-for-hire with a shrouded past; the philosophical and compassionate male teacher at a small island's school; a bad penny of an evangelical Adventist missionary; a meek, compulsively eavesdropping, middle-aged itinerant; and a thoughtful, wondering youth just awakening to the world. The story, such as it is, consists of what these people and others think and how they interact within the span of roughly one year. Lacking all melodrama, it is the purest realistic fiction imaginable.