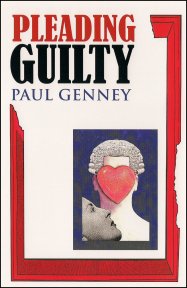 As anti-heroes go, the narrator of Pleading Guilty has got to be up there with Holden Caulfield. Supplant 'disaffected teen' with 'middle-aged, snobbish, wannabe lothario barrister' and you’re there. Henry Wallace has no respect for his wife or colleagues, lusts after every woman he sees, and has only moved away from London because ' there’s a rich vein of crime in Northern England'.
Still, the story of his demise is compulsive written, as Wallace’s un-PC opinions race through the narrative (lovers of paedophilia jokes will not be disappointed), taking the reader along with them. He treads a fine line between loveable loser and hateful bastard – his behaviour towards his sick wife results in her blaming herself and promising to get better – but Genney’s free-flowing narrative is powered by sufficient anger to get the reader through it.
Ultimately, whether you enjoy Pleading Guilty or not, it can’t be denied that this is a novel that stirs up strong feelings in the reader and energises debate around all kind of modern topics like no other novel published in recent history.

SC in The Leeds Guide

Frustrated with the moneymaking legal system he works in, highly-strung Wallace sinks into demise by beginning an affair which threatns to destroy his family. Yet surfacing from this outward tale of woe is bittersweet comedy. Genney's easy union of humour and tragedy makes this an appealing debut.

This novel is satirical, dark, humorous and enlightening with Genney using an intelligent wit to explore the hypocrisy of legal establishments failing the criminals, victims and legal professionals. With crime at the forefront of today's media, a novel tackling these issues is highly relevant to the reader and along with the serious legal criticisms the protagonist endures personal problems with money, adultery and disease. Pleading Guilty raises endless questions about the state of the legal system and humanity as a whole.

Paul Genney weaves a good tale with this patchwork legal quilt of 'fly on the wall' vignettes linked to his character, 'Wally' Wallace of Whitebait Chambers, up north. I met Paul recently and he outlined his book, which took my attention so I read it with interest after the defining Mortimer years with Rumpole and Sir John's concerns over 'New' Labour changes to our profession which seem to have set the current precedent in modern legal characters after Henry Cecil's Roger Thursby in the Fifties, which was controversial enough in its time.

Most practising barristers will identify very quickly with the issues confronting our flawed hero, Henry Wallace. I’m not giving the plot away, but let me just say that Genney falls nicely into the Somerset Maugham concept of the novel which should end with a death or a marriage, or so Willie said in his most esoteric work 'The Razor’s Edge' (which didn’t). Read 'Pleading Guilty' and you will see the nice twists as they develop.

It is a book for today with the nice, under-done boot kicking softly at the legal establishment, born more out of a frustration with the system which we all feel from time to time. This snapshot of legal life has the statutory four letter words -a bit too many, but probably at the publishers’ insistence if modern success in getting published is anything to go by. Some was rather unnecessary as most of these words are normally 'quotes in court' and not that often heard in the robbing rooms (as we are a bit busy).

I came away at the end, as I sometimes do at the end of a case, feeling for the loneliness of the advocate - many of us been there with Wallace and the dead client, and some of the more fundamental incidents of life which most portraits of barristers just seem to have to include: adultery and personal life, dealing with death, and quirky clients of one description or another. But that's what we do.

Don't get me wrong, I found this book hard to put down when I started it, so I became curious and had a bet with myself as to how Genney would structure and flow his 43 chapters. He has clearly borrowed some of his old briefs and witness statements (just to refresh his memory, of course) but the result works as his ingredients mix well with the office relationships and the great names he comes up with- I liked, especially, Horace Pickles, or should that be James Rumpole! Yes, I know who you mean. Readers should look at chapters 23 and 27 which I found particularly moving and I am sure many legal professionals can identify with much of Genney’s understated views.

This is a great new contribution to modern chambers fiction, and if he comes up with a sequel, let's have less of the bad language, more character description but keep your concept of two legal twists at the end. And please keep the jokes running, especially if they are at the expense of New Labour and certain London chambers. Well done, Paul. We can’t give you the 'detective writers' dagger’, but I will happily give you the ‘chambers’ writers gavel’ from the departed Rumpole, as Henry ('Harry') has now joined the legal fiction club for the twenty-first century, and let's hear more from him and your provincial Bar.

Phillip Taylor in The Barrister Magazine

Genney has a sure touch and is able to fuse undoubted humour with a compassion for the people who find themselves caught up in the uncertainties of the criminal justice system, and his chapters upon developing family tragedy are genuinely moving. Pleading Guilty introduces us to Henry Wallace, Horace Rumpole on circuit, and a welcome acquisition to the fictional Bar.