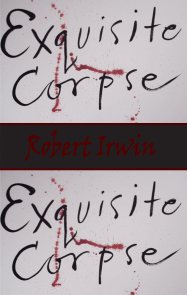 Exquisite Corpse is among the most adventurous, ambitious and daring novels published so far this decade.

Nicholas Royle in Time Out

Robert Irwin's spectacular intense novel of love and madness among the provincial British surrealist movement works all the better because authentic factual detail is woven so effectively into the fancy.

Robert Irwin's novel about English surrealism is funny and profound and hugely satisfying.

A.S.Byatt in The Sunday Times Books of the Year

The final chapter of the novel reads like a realistic epilogue to the book, but may instead be a hypnogogic illusion, which in turn casts doubt on many other events in the novel. Is Caroline merely a typist from Putney or the very vampire of Surrealism? It's for the reader to decide.

Robert Irwin is a master of the surreal imagination. Historical figures such as Aleister Crowley and Paul Eluard vie with fictional characters in an extended surrealist game, which, like the movement itself, is full of astonishing insights and hilarious pretensions. Superb.

Ian Critchley in The Sunday Times

There's something tremendously soothing about this hysterical novel, as if the world destroys and remakes itself more often than we think.

It is a rapid read in which the deftly drawn mood and perfect-pitch dialogue function as a sleight-of-hand allowing the plot to spring its surprises with flair.

This British novel about London surrealists in the 1930s is a diabolically clever cautionary tale about what happens when you tamper with identity in order to tap unconscious powers within.

.. an off-beat, brisk and darkly comic new novel. Robert Irwin is a deft writer with a fine ironic touch. He is interested in the Surrealist period without being besotted by it, and as a result Exquisite Corpse is far superior to the usual type of high-brow historical novel, in which real figures are brought creakily on stage for unconvincing little cameos. Such efforts tend to be embarrassingly corny: in contrast Mr Irwin's novel, in which fiction and reality are woven unobtrusively together, is consistently clever and inventive.

...little clues alerting us to the fact that someone is toying with us are dotted about the place, and there's a final chapter which obliges us to read the damn thing all over again. Well-controlled, intelligent.

Irwin's book follows the British Surrealist movement, weaving real events and historical figures with a mastery of Surrealist imagination. Much like the Surrealists themselves, Exquisite Corpse refuses to conform to expectation, it is both funny and intense; it explores reality, imagination and opium-induced hallucinations. The twists of the narrative ultimately leave the reader wondering what kind of book they have been reading. A. S. Byatt campaigned for the novel to win the 1995 Booker prize. While it didn't make the final shortlist, it certainly deserves the recognition.

A surrealist painter named Casper documents the romantic obsession that removes him from his bohemian life in London, Paris and Munich. As Casper searches for his beloved Caroline in Nazi Germany, Robert Irwin cleverly entwines historical detail with a critique of the Surrealist movement.Eccentric characters - both fictional and non-fictional -appear in
Casper's admittedly inaccurate recollection of events. Irwin accomplishes his ambitious task to complete an intense but humorous novel.

Tom Ireland in The Big Issue

Exquisite Corpse is one of the best novels I have read by an English person in my reading time. When I first read it I was completely bowled over.