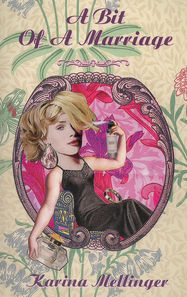 A Bit Of A Marriage

A satire on chic lit, and a laugh-out loud black comedy. Laura has been married to her rich handsome husband for 15 years but everything he does seems to annoy her. One morning she wakes up and decides she is going to leave him, now all she needs is a reason why. All marriages have their ups and downs, but this marriage is like no other. A must read dark and funny exploration of how wedlock can turn to gridlock.

David and Laura are in their mid 30s and have been married for 15 years. But theirs is a marriage in tatters. David runs one of the top legal practices in the country with a multi-million pound turnover. Laura on the other hand alternates between half-hearted attempts at being an artist(she has never actually sold a painting) and managing the house – which involves such arduous tasks as choosing a new floral display to correspond with the season, liaising with interior designers to select this year's colour scheme for the dining room and making sure the cleaner Anouschka doesn't forget to polish the silverware. The plot centres upon Laura’s dilemma – should she leave her husband? Or more to the point, why should she leave her husband? As Laura puts it:' Leaving him would be easy. Saying why was going to be hard.' Fidelity is not of particular importance to either David or Laura. In the course of a few months, David gets Anouschka pregnant and has an affair with Laura's best friend, Louella, while Laura has sex with a young estate agent(who confusingly is also called David).Written in the third person, the narrative perspective regularly switches between the main characters allowing the reader greater insight into each of the characters, from Anouschka's unthinking adoration of 'Meester David' to Laura's habitual tantrums whenever anyone dares to defy her. A more aristocratic and lighter version of Nick Hornby's How To Be Good, A Bit Of A Marriage satirises the frivolity of Laura’s upper class way of life throughout: 'Her only commitments are to organise the house, manage the social diary(and) keep herself looking slim and better looking than anyone else David is likely to meet.' A worthwhile read for any woman who has ever contemplated divorce but thought they might miss the Bentley.

Kate Fleming in Big Issue in the North

A dark and funny exploration of how wedlock can end in gridlock. Mrs Denver-Barrette, with emphasis on the final 't', a lady of class, charisma and beauty (but only in her own head) has spent another typical Saturday morning drifting in and out of sleep. She's unable to relax and dreads the mess of the kitchen after her husband David has attempted to make breakfast and then played their regular game of push and pull as to whether David will have sex that morning. Nothing much is different, apart from Laura has decided that today she is leaving her husband. Reading further will see David sleeping with the cleaner out of sheer frustration and having an affair with Laura's best friend. But the drama doesn't stop there. Laura seduces David's business partner, while her mother dies the luxury guestroom. All the while she struggles to find a good reason to go. Will Laura leave David or will she find a remedy to cure her allergic reaction to her husband...

This arch little novel was published on St Valentine's Day: if you received it as a gift, it might be time to take a long hard look at your relationship. Laura Denver-Barrette, our heroine of sorts, is happily married - and it's unmitigated hell. With malicious, almost masochistic glee, Mellinger describes an avalanche of aggravating details (microwaved chicken lasagne, pots with cherubs on them, a marginally protruding incisor) that would test saints, if they were allowed to marry. With plenty infidelities and a dying mother in the second-best guest bedroom, this satire on romantic fiction is as delightfully cringe-making and as deliciously embarrassing as Abigail's Party. Perhaps the era of bitch-lit is upon us.

The light and chirpy writing and exaggerated characters are strangely compelling despite their actions. There are some very funny moments too. When making her husband a meal Laura thinks to herself that she 'will take extra care to pierce the celophane on the pack of chicken lasagne nicely before she puts it in the microwave'. It is a supreme moment of sacrifice for her because' that's the kind of woman she is.' The idea that so much can be left to simmer underneath a marriage for years is a provocative one.

CHICK LIT is a much derided genre, yet its snazzily packaged offspring nestle comfortably at the top of the charts. People accuse these books of being tired and formulaic. But here is a new contender on the scene: Karina Mellinger works within and subverts that formula to depict the myriad nuances of marital breakdown, and achieves something well sculpted, sharply written and biting amusing.
The more Mellinger reveals, the more we feel a strange mixture of pity and contempt for these characters trapped in their weaknesses. Laura's ten-point plan to marry David is one of the funniest and saddest things I have read in a while. This is a dark, toothy, elegant winner.

Philip Womack in The Literary Review

Stress for Laura Denver-Barrette consists of wondering whether to have the dining room done 'in a pinky shade of red or a reddy shade of pink', but she a problem. She loathes her husband David, a boring lawyer who leaves bits of butter in the jam; this is tricky, because it is his money that enables her to live as she does. Laura's ghastly mother ( the fortune-telling, Harrods-shopping Lydia) isn't much help, but at least she keeps her mouth shut when she catches David in bed with the Russian cleaner. What will Laura do, apart from flinging herself on a hapless estate agent? This thoroughly jaundiced black comedy is one of those rare books without a single likeable character, and all the better for it.

When Laura and David were joined in holy matrimony 15 years ago, all seemed
as clear as a spring day. But 15 years hence a lot has changed. Laura is confused, extremely confused. Not only is she by her own account the world's greatest undiscovered talent, she is married to a man who keeps her in finefettle and upper middle-class luxuries. Of course she's miserable as any one
can understand. This is the plight of our heroine.

How does one have everything that objectively could be had yet find at itscore an unsatisfying drink of despair? Inattentive husband, screwball cleaner (housekeeper) Anouschka, psychotic demeaning mother Lydia, agents who ignore her artistic genius. Seems the entire world conspires to oppress and humiliate her. From this mélange of misery Laura construes an action plan: discover a reason to divorce husband!

It is from this takeoff point that the bullet train to Hades begins. Whether or not Laura succeeds in finding her divorce worthy reason, the reader can be certain of one thing: it will not be for want of trying. With keen wit and sardonic viewpoint sharply in hand Karina Mellinger offers an
entertaining and imaginative behind the scenes glimpse of television's Desperate Housewives in production. Being a blonde, Laura is well aware of the maxim blondes have more fun, yet she believes she was dreadfully
unadvised and left at the station, thereby missing the last train to the blonde Promised Land.

Our heroine is undaunted. Operating from the premise 'gentlemen prefer blondes,' she has for her displeasure landed herself a husband who's a gentleman with an overabundance of gentle, and a personality that when not
downright soporific is torrentially tedious. When one considers the comedic way Laura selects a husband, her step by step strategy hilariously itemized as a land-a-mate shopping list, one is immediately struck by the cunning,single mindedness, and yes genius Laura is possessed of. Yet one must at the
same time consider that finding a life mate is not a paint-by-numbers maneuver. Perhaps Laura has merely received the goods she has paid for, no frills attached.

However, despite the number of obstacles in her path to greatness, despite her overreaching solipsism, despite her explosions of anger for the simplest
of transgressions, one cannot simply write her off as inconsequential, nor
can one entirely despise her. Let's just say she's got that indefinable something.

So, in summation: A great trip down Memory of Misery lane with an odd yet oddly appealing conductor. Drop in to this title for a visit and find the confluence where Desperate Housewives and innovative authorship produce a
novel of grand import.