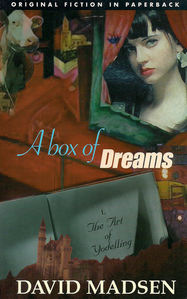 A Box of Dreams

An amnesiac man awakes on a train with a (but not the)Dr Freud, is forced into women's clothes, and is taken off to a gothic castle with mad counts and nymphomaniacs. Plot summary doesn't really help with Madsen's curious and at times ingenious novel. It's dreams within dreams within dreams;but they are so relentlessly extravagant and persistently onanistic that there's nary a 'pinch-me' moment.

On reaching the castle,the plots explodes into a carnivalesque mystery where we meet the delectably promiscuous Adelma and her madly patriachal father who are supported by all manner of grimy personnae. Madsen's whimsically grotesque characters are his strong point. As the layers of Hendryk's experience are peeled away under the smoggy baroque tone of the novel, an insanely off-key symphony is produced which, despite the characters repulsiveness, moves forward with charming ease.

CW in The Crack

More like a box of nightmares. Madsen's Escher-like surrealist illusion puts into words the most surreal yet frustrating of dream experiences, the ones that feel utterly real yet seem to be full of vaguely disturbing oddities. Our protagonist wakes on a train in central Europe, not remembering who he is or where he is going, wearing no trousers and being analysed by someone claiming to be Dr Sigmund Freud, but not the famous Sigmund Freud. Taken off the train by Freud and nasty train guard Malkowitz and told to wear a skirt, he finds himself en route to a castle where he learns he is meant to be a yodelling expert. Bizarre sexual shenanigans, and confusion, follows until a devilish twist provides a respite from the technicolour freakshow.

The id is out of its box and scampering all over the shop in Madsen's gothic romp. Our narrator, who may or may not be called Hendryk, wakes with a start from a dream of stubbly sexual assault on a train. Finding himself in a bewildering Mitteleuropa, he is counselled by Dr Freud (not that one) and embroiled in the irrational doings of a malodorous ticket inspector, a sadistic valet, a lascivious count and his luscious daughter. He is also confined to a velveteen skirt and taken for an authority on yodelling. Madsen(the pseudonym of a theologian and philosopher who, I'm guessing, rarely has this much fun in the day job)has his favourite themes - food, sex and Catholics - and here adds psychoanalysis to the mix, as Hendryk struggles for self-knowledge. Amid furtive fumblings, man-to-man horseplay and a cattle stampede, he sidles from dream to dream, repeatedly waking to find that his consciousness has been drooling again.

David Jays in The Guardian

Is it all a dream? Or will he soon wake up with everything back to normal? Actually, the answer is a bit more complicated, and a bit more clever than either. Anyhow, take it as deep, take it as daft, but it's a great laugh that won't disappoint the growing band of fans of the 'theologian'.

Tibor Fischer in The Daily Telegraph

A polymorphously perverse romp through the fundamentals of psychoanalysis, A Box of Dreams is intellectually and imaginatively seductive. A circular story whose end is merely a return to its beginning, the book is a narrative mandala, drawing the reader ever closer to its enchanting, fearful centre.