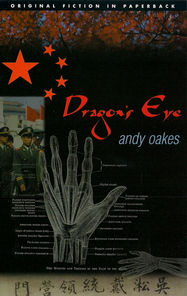 The following investigation is described in detail as brilliant and meticulous as the sanguine but relentless investigator,Sun Piao, around who the novel revolves.Oakes is a master
of research and evocation and, with more twists and turns than a gyrating Chinese dragon, the story peels back the many layers of the country's society to reveal a web of corruption and deception.

For a debut novel, Dragon's Eye is a remarkably assured piece of fiction.In terms of structure, Oakes displays a natural gift for suspense, and manages to tease the reader at all the right moments with just the right amount of information to keep the pages turning.The narrative pace is also impeccably created, with just the necessary amount of restraint at key places to keep things ticking along nicely.Add to that a real flair for description which immerses the reader in the strange and wonderfully alien world of modern urban China, and you've got a debut novel that will surely attract plenty of acclaim.Dragon's Eye is a cracking purchase, and Oakes is a crime writer with a promising future.

Doug Johnstone in Scotland on Sunday

I don't know if Oakes's picture of China is accurate, but it is something better:convincing, filled with both impressionistic atmosphere and precise detail, scents and textures, sweat and silk, mud and guns, burning charcoal and peasant food. The poor old critic's cell door suddenly opened wide after the long Christmas bang-up:Dragon's Eye is a Get-Out-Of-Jail-Free card for the imagination.

The deep, dark, secret places of the inscrutable Chinese mind is where you're plunged from the off in Dragon's Eye. This is Shanghai, and Oakes will make you believe you're there in this cracking crime thriller. You'll find yourself almost smelling the peasants, the stinking river, the dubious food, as well as the fear and the lies as a violent murder leads the hero Sun Piao and the reader through a sewer of intrigue.

Eight gory,ritualistic murders discovered in a muddy river in the dead of night. A bitter loner detective with a troubled past. A web of deceit drawing together corporate greed, political corruption, gangsterism and a lot of dark, rainy, moody street backdrops.

The pictures conjured up of Shanghai and of the complexities of a corrupt and claustrophobic China is gripping. Accurate or not, it is the long, stealthy shadow of the state falling across its pages that marks this crime novel out as something of an original in its genre.

Ranti Williams in The Observer

It’s an excellent bit of storytelling – coarse, nasty and gritty – while at its centre is a decent and humane man. If you only read one detective novel this year..

Eight mutilated corpses beached on the muddy flats of the Huangpo river give Shanghai its biggest murder case in years. Senior Investigator Sun Piao’s gruesome job of finding out what links each body to the next, other than the shackles at neck and ankle, provides the murky intrigue of Dragon’s Eye.
The hallmarks of Party and Security Service involvement should have warned Piao off the case from the beginning. Even the Chief Medical Officer took one look at the corpses’ neat scars and refused to investigate. Piao had to coerce his deputy’s younger brother, Pan, a gynaecology student, into opening them up in a meat-packing warehouse in order to discover the vital organs had been clinically removed.
Oakes is unafraid of using timeworn garments of the hard-boiled genre to good effect. Piao nurses his sullen integrity while marooned in ‘oceans of loneliness.’ Unlike his peers of Party yes-men in the Homicide Department, Piao has a healthy cynicism about the Party which he airs often enough to cause himself serious trouble. He is undeterred by accumulating threats; he routinely breakfasts on Panda Brand cigarettes washed down with Tsingtao beer. His flat has the down-at-heel aura of a miserable bachelor, strewn with debris of single occupancy since his wife Lingling – whose photo lies face down on the shelf – was stolen by Minister Kang Zhu, one of the most senior of the Party cadre to be his mistress. Piao’s boss, Comrade Officer Liping, casually passes on news of her pregnancy while suspending Piao from duty. But even this bleak turn fails to shake off Piao’s faithful hound of a deputy, Yaobang, a marvellous creation of gluttony, stained ties, expletives and improbable, boisterous good humour.
A lonely detective with a yappy sidekick unearthing evidence of his superiors’ monstrous corruption is nothing novel: where Dragon’s Eye departs from familiar form is with Oakes crafty manipulation of what the racket might be. The neat mutilation of the corpses straightaway suggest some sort of organ smuggling, but this theory doesn’t fit with the unconnectedness of the eight manacled bodies(four of whom were prisoners, who, supposedly, had already been executed and cremated). Another was an American archaeologist who never officially entered China, and Piao and Yaobang begin to wonder about smuggling cultural artefacts.
All and none of these leads make up the sharp and unexpected twists of the denouement. Piao’s conclusions change and merge with every fresh layer of political depravity that his investigations unearth.
‘Why?’ gradually overtakes ‘ who?’ as the main quarry on a sinuous trail that forces Piao to consider his own unwitting complicity in the riddle of the mutilated corpses. Oakes scatters plenty of well-placed cul-de-sacs into his labyrinthine plot. Despite some overwritten passages attempting to convey atmosphere which congest the opening of the this thriller, there is plenty of meat in Dragon’s Eye – both literally and metaphorically – to satisfy the crime addict’s long pursuit.

James Urquhart in The Independent on Sunday

The chain-smoking detective at the centre of Dragon’s Eye is, naturally, cynical and jaded, but also metaphysically challenged – he hates his job, but could not be and, perhaps, would not choose to be anything else and is thus condemned to patrol the streets of Shanghai, a lonely and haunted figure. Meanwhile, Yaobang, his partner in crime-solving is more than just the 'buddy' element of the story, but a brilliant creation in himself: a beast of a man who, with his finger-licking satisfaction of greasy comestibles, brings the tastes and smells of Shanghai to life. As the plot, which can fairly be described as labyrinthine, builds, so does the feeling of claustrophobia as the circle of investigation becomes wider and the people Sun Piao can trust become fewer. All told, a gripping and deeply involving genre piece.

Andy Oakes has created a complex character in his protagonist, a detective with more baggage than your average detective, making this thriller an often disturbing, if strangely fascinating read.

There is no better way to examine a culture or a country than through the eyes of an honest homicide detective investigating a murder that no one but he wants solved. Andy Oakes has created a remarkable character in Chief Investigator Sun Piao, who would be just at home and competent in New York, London, Paris, or Moscow as he is in Shanghai. Dragon's Eye is as fine a debut novel as I've seen in years. Really a great read.

Dragon's Eye was way out ahead of all other entrants for The European Crime and Mystery Prize.

The jury of The European Crime and Mystery Prize, sponsored by French National Railways.

The most compelling character in Oakes' melancholy, evocative new conspiracy thriller is the present day city of Shanghai itself: dark and decadent and pulsing with menacing energy, with suggestion of the lawlessness of an Old West town or gangland metropolis.

A masterly depiction of modern Shanghai and an admirable hero.

The rich textures, smells, sounds, and culture of modern Shanghai thoroughly permeate this debut novel, which received rave reviews when it was first published in Britain.

...dazzling descriptions of Shanghai and its denizens.

Judith M.Redding in The Baltimore Sun

The tale of a doggedly honest detective with a blind eye for self-destruction hits a satisfying chord. Funny thing about that Chinese noir: You read one, and you’re hungry for another two hours later.