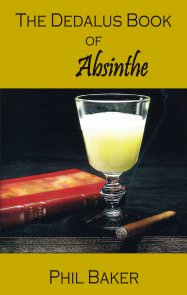 The Dedalus Book of Absinthe

This is the sort of book it would be very easy to do badly. Phil Baker has, instead done a magnificent job; it is formidably researched, beautifully written, and abundant with telling detail and pitch-black humour.

As to whether absinthe is harmful or this book irresponsible - I don't give a damn. All I know is that the former is very pleasant and the book is informative, amusingly written and perceptive. As the Idler put it a couple of years ago; tonight we're gonna party like its 1899.

James Joyce in Finnegan's Wake described a character as 'absintheminded', while lesser punsters spoke of absinthe making 'the tart grow fonder'. It reaches across time, this 'potent concoction of eccentricity and beauty'. Alluring, then informative and witty.

Dwarfish Bohemian psychopaths in stove-pipe hats, ageless Louisiana vampires, Victorian books bound in human skin, fin-de-siecle brothels, strange Goth subcultures and lice-ridden poets: yep, it's a history of absinthe. There's cultural history by the bucket load, possibly the worst Victorian poetry ever to have seen the light of day for a century, along with the full story of today's absinthe boom... An indispensable guide for the contemporary absintheur.

Andrew Jefford in The Evening Standard

For someone who actually likes the beastly stuff, Phil Baker writes very well and drily... I greatly recommend the tasting notes of current brands at the end...

Timely cultural study of the drink with a bad reputation. Psychogeographer and critic Baker traces its history from herbal tonic to decadent luxury via Verlaine, Rimbaud, Wilde, Dowson, Crowley, Machen, Strindberg, Jarry, Van Gogh, Toulouse-Lautrec, Hemingway and Picasso; discusses the rituals of absinthe drinking and explains how it works on the nervous system. With a user's guide to the modern versions of the drink available, this is the definitive text on the subject.

Gary Lachman in The Fortean Times

Roy Herbert in The New Scientist

... packed with enjoyable anecdotes and eccentric absintheurs, and reveals why it has been the most demonised of all alcoholic drinks.

The book is an effortlessly engaging, robust little number, unpretentious and with a strong burst of humour on the nose.

Baker's account of the rise, fall and re-emergence of the queen of poisons is packed with enjoyable anecdotes.

Absinthe is a brilliant book full of arresting facts and new illuminations.

Phil Baker's consistently enjoyable study is meticulously researched, liberal with its quotations,comprehensive in its range, and light in its telling.

Alexander Barley in The Literary Review

This is all great stuff, and sets us up for the extended coda of the modern absinthe revival - both in its American gothic variant of New Orleans and Anne Rice vampires and its British co-option into the hellbent twenty-first century drink-drug cocktail culture. Turning finally from the drinkers to the drink, we get the bottom line on whether the wormwood in absinthe makes it a more trippy intoxication that other spirits, or more toxic (or, as it turns out, both). Rounded out with an appendix of classic absinthe texts, another of road-tests of the currently available brands, and plenty of notes and sources, this is a very appealing package - tastier, definitely cheaper and probably more illuminating than the drink itself.

One of the most fascinating themes in this witty, erudite and desperately poignant study is that of the cultural war waged between England and France at the end of the 19th century. English moralists would wax not very eloquent on the sapping effects of absinthe on the susceptible French soul, always uncomfortably aware that the French were producing writers and artists of a calibre unmatched in England.

Murrough O'Brien in the Independent on Sunday

Still, as alcohol, absinthe is harsh, potent stuff. If only the booze went down as easily as the book. The Dedalus Book of Absinthe, ably written by Phil Baker, is a well-researched and entertaining wealth of fact and fancy, anecdotes and information about the Green Fairy. Interspersed with historical accounts of absinthe's production and legislation are debauched accounts excerpted from the writings of famous bebauchees, among them Hemingway, Picasso and Van Gogh. Also surveyed are the rituals of libation, including digressions on the appropriate hardware.

It would be good to state that no humans were injured in the reviewing of this book, but it wouldn't be anything like the truth. Absinthe drinking is one of those dangerous little crazes that catches on from time to time, is taken as a bit of fun by most and to a fatal extremes by a few. Phil Baker's book is a well-researched and interesting trip through the history of absinthe, and worth reading while you head towards a coma.

Baker's entertaining style makes The Dedalus Book of Absinthe a wonderful introduction to such influential figures as Dowson, Wilde and Verlaine. He also throws in enough tidbits of information on more obscure figures to make the book worthwhile even to folks who know their Symbolists inside out.Baker also provides some fascinating lore on the often seedy places where absintheurs tended to congregate.

This splendid book also discusses the rituals and modus operandi of absinthe drinking, with a short chapter on the medical properties and effects of the drink, and includes a collection of apposite French poetry and prose. It also includes a useful appendix where current brands are tested and given a 'a Dowson rating'. All in all, a most entertaining and informative read, for which Mr. Baker is to be commended.

Lindsay Bagshaw in The Chap Magazine

As Phil Baker notes in his excellent cultural history The Dedalus Book of Absinthe, cases of insanity tripled during this period and it was thought that nine out of 10 cases were due to absinthe poisoning. The drink became known as ‘the Charenton Omnibus’ (Charenton was a large mental hospital).

Chris Hirst in The Independent's Magazine

This powerful spirit is enjoying a renaissance, although its consumption seems to have more to do with its potency than its supposedly literary and artistic heritage. Here, for those of you looking for an excuse, is the poetry, literature and art that support this substance's pedigree, including Oscar Wilde, Aleister Crowley (of course)Toulouse Lautrec and Vincent Van Gogh. Hopefully there will be a companion volume on Tennents Super.

Just as a cookery book makes one hungry, a good book about drink - and this is a very good one indeed - can make one want to go out and get trashed. But beware. The 'fairy with green eyes' will always be linked with the decadence of Paris in the 1890s, a city of garrets and artists and madness. The image, as Baker avers with loving detail, is not at all far out. Witness Paul Verlaine frequently going off on one, or the strangely picturesque degeneration of E. H. Dowson. There are also cameo appearances from luminaries such as Hemingway and Aleister Crowley. What Baker does quite superbly is navigate twists and turns of tone: from dark sympathy for outbreaks of alcoholic insanity to anarchic black hilarity. And the history is hypnotic: Pythagoras was a great believer in the properties of wormwood, from which absinthe is derived. There’s even a fleeting mention of it in the Book of Revelation. That's more than can be said for Strongbow.

SMcK in The Daily Telegraph

The book painstakingly and brilliantly recounts where absinthe first appeared, its eventual banning and how it is revered as a poisoned chalice still to this day for many. A superb read.

JP in The Crack

Phil Baker has a marvellously humorous turn of phrase, and his book is hugely enjoyable.

Helen Zaltman in The Observer

Phil Baker thoroughly explores the drink's impact on pop culture and how its banned status added to the myth and bad reputation, from Parisian poets right up to modern day Goths. Whilst it is undoubted that absinthe inspires and elevates the mind, it is also clear that it wipes out any memory of such. Try out Baker’s tasting guide at your peril!- yes, you may wake up with a masterpiece but most likely followed by a momentous and miserable migraine.

Rich Jevons in The Leeds Guide

According to the Wikipedia, Absinthe "is a distilled, highly alcoholic, anise-flavored spirit derived from herbs including the flowers and leaves of the medicinal plant Artemisia absinthium, also called wormwood ... Absinthe is often referred to as la Fée Verte ("The Green Fairy") because of its coloring ... Due to its high proof and concentration of oils, absintheurs typically add three to five parts ice-cold water to a dose of absinthe, which causes the drink to turn cloudy (called "louching"); often the water is used to dissolve sugar to decrease bitterness. This preparation is considered an important part of the experience of drinking absinthe, so much so that it has become ritualized, complete with slotted absinthe spoons and other accoutrements." Beginning with the 1905 Absinthe Murders, this book offers a splendid cultural history of this most myth-riddled drink. And who didn't drink the bitter swill!? Verlaine, Rimbaud, Baudelaire, Oscar Wilde, Aleister Crowley, Alfred Jarry, Van Gogh, Toulouse-Lautrec, Ernest Hemingway and Picasso all guzzled the stuff and often penned peans to it. So, next time you fancy getting hammered, read this first, and then do it with style!

Mark Thwaite in The Book Depository

A reprint of this excellent scholarly book recounts the terrible history of the Green Fairy in all its depraved glory right up to the modern day. With an examination of the science of absinthe and the social backdrop that surrounded absinthe drinking, it has numerous anecdotes of drinkers like Machen, Verlaine, Wilde, Van Gogh, Hemmingway and many interesting characters. There are two appendixes, one giving the low-down on modern absinthe brands, and another reproducing literary extracts relating to absinthe including French poetry and Mary Corelli's 'Wormwood'. One extract provides R. Thurston Hopkins' account of drinking absinthe in the Bun House, on The Strand in the 1890s with Ernest Dowson. He also met, ''Arthur Machen in a caped Inverness' coat which he told me had been his regular friend for twenty years. 'I hope to wear out four of these magnificent cloaks during my lifetime - anyway I can make four last out a hundred years!'

Every tale,name and historical fact associated with absinthe is mentioned in this new book, and I have to say, it is a jolly entertaining and gripping read.