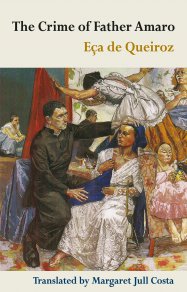 A major source of pleasure and one of its many strengths is its wide-ranging panoply of perspectives, its generosity in assigning chapters to be fleshed out by the lesser characters and its depiction of their idiosyncracies:the pious and easily offended pharmacist Carlos;the gluttonous Libaninho with his penchant for rice puddings and port;and the lazy,sleezy Canon Dias, Amaro's superior, who becomes a gloating accessory to his crimes.The use of suspense and ellipsis ensures the narrative is compelling;its plot at times almost takes a turn into Gothic territory. Margaret Jull Costa provides a solid, clear and flowing translation, which ensures that Eca's drily understated satire, his harsh but lucid critique of human selfishness and inadequacy are telling;it also reflects his engaging sense of bathos and all that is amusingly grotesque.

Queiroz is far greater than my own dear master, Flaubert.

The Crime of Father Amaro is also the best possible introduction to Portuguese literature.It is the first great realistic novel in the language; a product of the wonderful period when it seemed to be easy, all over Europe, to write novels of the highest literary quality which were also commercial successes.So it is instantly approachable, while at the same time complex and ultimately mysterious. All these riches are made available in a brand new translation.When The Crime of Father Amaro was first translated, very inadequately, in the sixties, it still made quite a stir, but was quickly forgotten.Dedalus deserve every credit for promoting Eca once again.Margaret Jull's Costa's new translation is far better than the earlier one.She translates everything, for one thing(the sixties version is full of omissions).She shows considerable skill and tact in handling the tricky problems posed by Portuguese names, of people and of places, and by the technical vocabulary of the Church. These things, the curse of poor translators, are treated simply and naturally without the need for footnotes.The rich patterning of the text survives as a deeply satisfying experience.

Tom Earle in The London Magazine

This is a terrific novel, and I hardly go out on a limb in saying so. Jose Maria Eca de Queiroz is generally regarded as Portugal's greatest novelist, author of some half-dozen masterpieces that bear comparison with the work of his masters, Flaubert and Zola. Chronologically, The Crime of Father Amaro(1876)can be regarded as Eca's first novel, though he corrected and rewrote it significantly for a later edition(1880)which the distinguished translator Margaret Jull Costa uses as her copy-text.Being sadly ignorant of Portuguese, I can only say that this new translation reads fluently and, more important, makes available to a new generation a work of mesmerizing literary power.
The novel's plot is as sensational now as then: A priest, prey to erotic reverie and utterly without a true clerical vocation, half seduces, half falls in love with, the daughter of his landlady.The first two-thirds of The Crime of Father Amaro depicts the tactics of growing desire between Amaro and Amelia.The last third charts the consequences of their illicit passion.

De Queiroz' use of description is as visually focused as his wit is sharp. Every physical detail of Amaro's surroundings, each shack and resplendent bourgeois salon, stands out in bright relief. As translated by Jull Costa, de Queiroz' language is capable of glowing softly as well as casting a glaring light.It brings a sparkling, brilliant clarity and unrelenting sense of social absurdity that makes it essentially youthful.

Barbara Strickland in The Austin Chronicle

It is the unsparing portrait of a stagnant society, a novel filled with a host of fascinating secondary characters, unforgettably described. It is mordantly funny, tragic, and, above all, humane. It tells the destructive love story of Amaro Vieira, a Catholic priest and a “handsome, strapping lad,” and lovely Amelia. Their relationship is set against the backdrop of Leiria, a small Portuguese city, bursting with narrow-mindedness and hypocrisy. Eça spares no one; he rails against priests, who believe “the main cause of poverty…is immorality,” against superstition and provincialism. His eye for detail is striking, whether describing the physical beauty of the Portuguese countryside, the psychology of a character, or the distended bellies of poor children. It’s impossible not to wince when Amaro fumes, “Do they imagine that as soon as an old bishop says to a strong, young man ‘Thou shalt be chaste’ that his blood suddenly grows cold?” Jull Costa’s brilliant translation preserves Eça’s sharp, ironic prose and the elegant flavor of his humor. I hope Ms. Jull Costa will do the English-speaking world a tremendous favor and translate Eça’s other novels. His is a literary production not to be missed.

An engrossing masterpiece, excellently translated by Margaret Jull Costa(as are other Eca classics, from Dedalus).