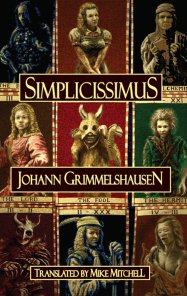 This is Germany's first-ever bestseller, republished and translated more than 200 times. Brecht took Mother Courage out of it, and it receives a mention in one of John Le Carre's novels. It is a violent and often all-too-realistic picaresque, set in war-torn Europe during the 17th-century Thirty Years War. Simplicissimus is the eternal innocent, the simple-minded survivor, and we follow him from a childhood in which he loses his parents to the casual atrocities of occupying troops, through his own soldiering adventures, and up to his final vocation as a hermit alone on an island. It is Rabelasian in some respects, but more down to earth and melancholy.

It is the rarest kind of monument to life and literature, for it has survived almost three centuries and will survive many more. It is a story of the most basic kind of grandeur - gaudy, wild, raw, amusing, rollicking and ragged, boiling with life, on intimate terms with death and evil - but in the end, contrite and fully tired of a world wasting itself in blood, pillage and lust, but immortal in the miserable splendour of its sins.

Grimmelshausen's Adventures of Simplicius Simplicissimus is one of the great picaresque novels. Like Cervantes and Halek, Grimmelshausen invented a naïve, feckless hero with a guiless yet lovable persona whose innocent wisdom shows up fully the world around him, Simplicissimus comes to symbolise sanity in a depraved, degenerate Europe torn apart by the Thirty Years' War, and the novel, besides being funny, was German Baroque literature's most powerful plea for peace...
Grimmelshausen brilliantly captures the brutality of warfare,the pillage, rape, plunder, torture, hanging, rapine and incineration... The book's sense of humour balances the horrors and sordid realities that would otherwise be overwhelming... Simplicissimus has been well served in English. At least eight translations have appeared to date. Mike Mitchell's new one is the raciest and most readable of all, the one most likely to appeal to a contemporary reader.'

Jeremy Adler in The London Review of Books

Mitchell's brilliant translation of Simplicissimus in 1999 updated the earlier, stilted English-language version by S Goodrich from 1912. Mitchell caught the vigour of the voice which, although conversational in tone, also has some subtle stylistic shifts. Mitchell shares Grimmelshausen's lightness of touch and conveys the energy of a narrator thinking on his feet.